When deforestation is at its peak, this man has shown others the way by converting a barren patch of land into a thick forest within a span of three years.

BALLARI: When deforestation is at its peak, this man has shown others the way by converting a barren patch of land into a thick forest within a span of three years. Adjacent to a high-level canal (HLC) near Kamalapur in Ballari district of Karnataka, wildlife enthusiast, farmer and tour operator Pampayya Malemath can be seen often caring for the trees that he planted three years ago.

A sling attached to his camera hangs on one side as he takes cover amid a bush to click a painted spur fowl, which comes quite close to him. He beams with joy as he shows the picture and says, “Just a few years ago, there was no wildlife here at all. It is all because of this tree cover. There are at least 70 species of birds now,” he beams. 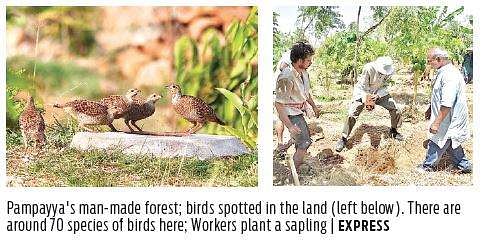 There is a stark difference between the landscapes in and around  Pampayya’s land — his land is with fully grown green trees and those around it is still full of juliflora (popularly known as Ballari jaali). At the beginning of the story, Pampayya buys a one acre land, which was actually a debris dumping yard. Around the same time, he got inspired by wildlife enthusiasts and researchers. “I used to volunteer to help them after the Daroji Bear Sanctuary was notified here. My interest grew and I decided to contribute something of my own to the wildlife,” he said.

He began by planting saplings in the land that he owned. “I planted teak, silver oak, melea dubia, and fruit varieties like mango and guava, shady tree varieties like Singapore cherry and native plants like wild jasmine, jamun and amla. At that time, the land around my farm, which was owned by Tungabhadra Board, was lying unused. As per my request, the Board gave me the land on condition that the ownership will rest with it,” he said.

Recalling the efforts of Saalumarada Thimmakka, Pampayya says the green cover that he has created will help the wildlife a lot. Animals like bear, leopard, civet cat, black naped hare and other mammals are frequently sighted here.

Recollecting the days when he started planting saplings, he thanked his friend and neighbour Manjunath, who allowed him to use the water from his borewell to water the saplings. Now, the water level in his farm has increased. He has also constructed two ponds for birds.

Tungabhadra Board chairman D Ranga Reddy said, “We are ready to hand over to him more land if he is willing to develop it. Another group also sought land to develop it on the lines of Pampayya, but they haven’t made much progress.”