Tucked away at the southern end of the Ayodhya Hills in West Bengal’s Purulia district is the non-descript village of Chorida. At first glance, nothing distinguishes this village of 350 households from others in the semi-arid district. But a close look at 30-odd shops lining the main road tells a different story. Colourful Chhau masks are made and sold in these shops in Chorida. The village is home to Purulia’s famed Chhau, a martial dance form exhibiting tales from the Mahabharata, Ramayana or Goddess Durga’s victory over Mahishasura through rapid, swirling movements, somersaults and mock clash of swords. There are two other versions of Chhau – in Jharkhand’s Saraikela and Odisha’s Mayurbhanj – but neither has been as popular as Purulia’s Chhau. Over 300 Chorida artisans work from dawn to dusk making small and big masks, priced between `150 and `15,000, which are not only made for local dance troupes but also sold to tourists and exported. The dance form has been famous throughout the state since Purulia district was included in West Bengal after the 1956 state reorganization, but was little known nationally till it was displayed in Republic Day tableaux and in Bollywood movies such as Barfi, Lootera and Jagga Jasoos. A shop-owner, Parimal Dutta, explained how masks are made.

“First, we have to bring clay from the local stream. Then, we make the outline of the face and apply a layer of ash on it. After that, we wrap the structure with 12 layers of paper and dry it for 5-7 hours. Next, we put a thin layer of clay and wrap it with cotton cloth and dry the structure again for 9 hours. Then the mask is polished and the mud is removed from the back of the head. The painting and decorating of the masks is then completed.” Dutta’s masks were judged the best four times at the state government’s annual Milan Mela in Kolkata and second thrice in district competitions. 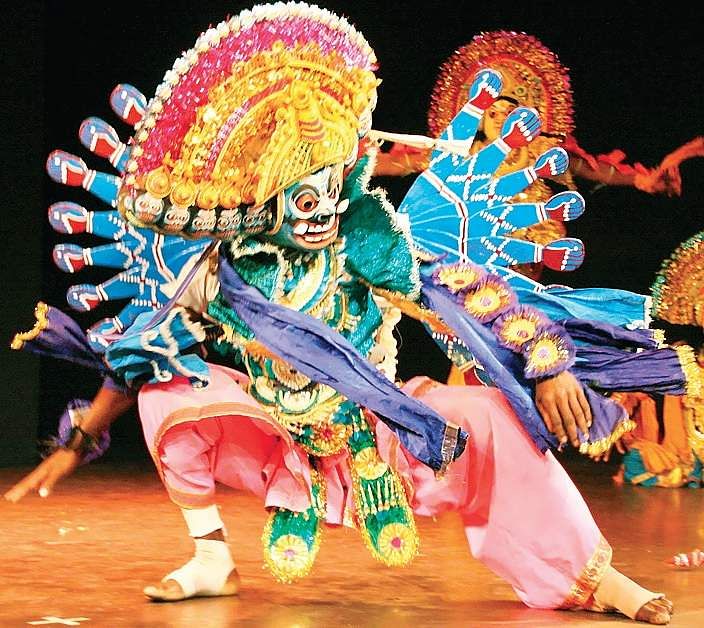 Most people of Chorida belong to the clay artist caste of Sutradhar, although castes such as Kalindi, Roy, Mahato and Brahmins are also there. The artisans have got the Geographical Indication (GI) tag for the Purulia Chhau masks, so they can’t be copied. As it takes around a week to make a mask, all members of the family are involved in the work. “The women make the outlines and dry the masks while men polish and paint them. The embroidery is done by children as they have small hands which are suitable for fine work. When there is no work at home, the children also work in others’ houses for which they are paid `100 daily,” said local artisan Raju Sutradhar.

Unfortunately, the masks have no specific market and sales depend on tourists and bulk orders. “Our sales peak from August 15 to December 25 when tourists from Kolkata visit Chorida and special parking arrangements are made,” said Binod Sutradhar, an artisan. Work continues throughout the year and around eight masks are made every day. If there is a bulk order, the pace of work is increased to meet the demand. The artisans said Indian tourists preferred masks of gods and goddesses whereas foreigners opted for faces of demons.

Although mask-making is over 300 years old, many artisans want to opt out of the profession because of various problems. “We have to borrow money from moneylenders at 10 per cent interest per month, which is quite high. Although our sales have increased because movies and social media have popularised the masks, the effort involved in making one mask is not compensated by the remuneration. I have been working for over 30 years but I don’t want to continue this. I don’t want my children to make masks either, but the problem is we don’t know anything else. Our work has been too specialised for us to choose a different profession now,” another ar tisan, Bikram Sutradhar, said. Most of the Sutradhars in the village are landless and have to depend on food bought from local markets for survival. Unlike many other artisan communities of Bengal, the Chhau mask-makers of Chorida do not receive the state government’s artist stipend of `1000 per month despite their having made several deputations at Kolkata and Purulia. “All we get to hear from officials is that ‘we will look into the issue’.

We are busy throughout the year and it is very difficult for us to move around the offices with the applications,” Parimal Dutta, also an artisan, said. Often, Chorida mask-makers are invited to other states on work. “We are invited by Bengali associations in Delhi, Lucknow, Bengaluru, Hyderabad, Mumbai and Chennai to make Durga idols and decorate pandals according to the Chhau theme. We charge according to the work. It may range between `1.5 lakh and `3 lakh. But again, the effort and investment are so high that the profit appears too little,” Raju Sutradhar said. Surprisingly, most youngsters The Sunday Standard spoke to about their choice of career said they wanted to continue maskmaking and use social media to popularise their product and create an online market.

DOES THE CHHAU MASK HAVE A GI TAG?
Yes. It is held by Purulia’s Chorida village
HOW LONG DOES IT TAKE TO MAKE A MASK?
About seven days. They are made in the likeness of gods and goddesses or demons, and whatever else the stories demand

HOW MUCH DOES IT COST?
Between J150 and J15,000
WHAT IS THE PROCESS?
It is a lengthy process requiring collection of clay from a local stream, fashioning a mask out of it, drying it with newspapers for several hours, adding another layer of clay, drying it again, and then polishing and painting it

HOW LONG HAVE THE CHORIDA ARTISANS BEEN MAKING THE MASKS?
For about 300 years. There are about 300 artisans making them. They are sold in about 30 shops along the main road in Chorida village
WHAT PROBLEMS DO THEY FACE?
High rates of interest from moneylenders, no stipend for artisans
WHEN DO SALES PEAK?
Between August and December

WHAT IS THE CHHAU DANCE?
It is a martial dance form native to West Bengal’s Purulia district, in which dancers donning Chhau masks perform tales from the Mahabharata or the Ramayana or the slaying of Mahishasur by Goddess Durga

WHAT GENRE DOES
IT BELONG TO?
Semi-classical, having tribal, martial and folk elements. It is marked by rapid swirling movements,  somersaults and mock clash of swords.  There are about 35 members in each troupe
DOES IT HAVE ANY VARIANTS?
Yes, two variants -- in Seraikela in Jharkhand and Mayurbhanj in Odisha. But neither is as popular as Purulia’s Chhau dance, which was influenced by Shaktism
WHICH IS THE MOST POPULAR CHHAU DANCE?
Slaying of Mahishasur by Goddess Durga
HAS THE CHHAU DANCE GAINED POPULARITY OF LATE?
Yes, because of social media and performances in recent Bollywood movies like Barfi, Lootera and Jagga Jasoos