For Opposition unity, it’s Mayawati all the way

BSP recovers from string of electoral losses to emerge as a key player at a time when regional parties and Congress seek to join hands against BJP.

By Richa Sharma and Namita Bajpai

NEW DELHI/LUCKNOW: The recent Opposition bid for unity has put BSP supremo Mayawati, the only Dalit leader with pan-India appeal, back in the spotlight. On her part, after losing three back to back elections in Uttar Pradesh—2012, 2014 and 2017—and having no MPs in the Lok Sabha, the BSP supremo seems to have shed political rigidness in favour of new shades of political prudence.

Her clout increased after joining the JD(S)-Congress coalition government in Karnataka, and she is ready to leverage that by playing a key role in upcoming Assembly elections in three key states—Madhya Pradesh, Rajasthan and Chhattisgarh—where talks are on for a Congress-BSP alliance to take on the BJP. These three states account for 66 Lok Sabha seats.

In UP, despite the bitter history between the two parties, she walked an extra mile to extend support to Samajwadi Party candidates in the Gorakhpur and Phulpur bypolls, thus adding a new chapter to the history of political coalitions in the state. 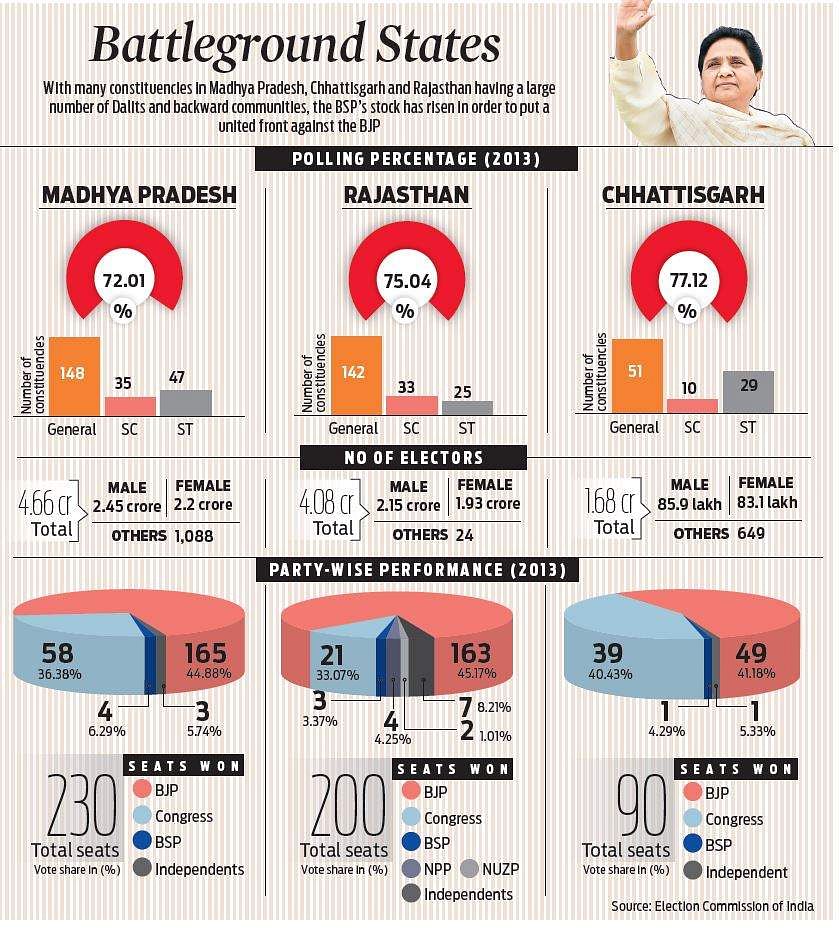 Mayawati is reportedly bargaining hard with the SP for a respectable number of seats in 2019 Lok Sabha polls. In Haryana, the Indian National Lok Dal (INLD) has already struck a tie-up with the blue brigade.
The data analysis of the 2013 elections and vote share of the BJP, the Congress and the BSP in MP having 230 seats show that the difference between the BJP and the BSP-Congress combine is only 2.21 per cent.
While the BSP won only four seats in MP, it dominates seats having a large number of Dalit voters, especially in the Chambal area. The BJP would have got 41 less seats had the BSP and the Congress contested together.

The Congress has realised that in its effort to uproot 14 years of BJP rule in MP, the BSP could be a major spoilsport and an electoral understanding is important.

In Rajasthan, known for electing alternate party governments every five year, the vote share of the BSP-Congress in 2013 was around 37 while they won only 24 seats against the BJP’s 165 seats, with a vote share of 45 per cent.

Experts feel the alliance could help in translating this vote share to seats in favour of the Congress and the BSP. The alliance is likely to attract more voters, keeping in mind winning probability of common candidate, which could be a deterrent in case the two parties contest against each other.
The two parties together got 3.54 per cent more votes than the BJP in Chhattisgarh in 2013, while they won 40 seats against 49 of the ruling Raman Singh government.

“If they (BSP-Congress) don’t align, then it will have negative impact on both the parties in the three states. Politics is getting polarised and an understanding between the two will help both the parties gain,” said former BSP leader Shahid Siddiqui.

“Besides the Congress and the BJP, the BSP is the only party having presence in all north Indian states and even in southern and western states. It (BSP) has a potential to consolidate Dalits, tribals and minority votes. Dalits are unhappy with the BJP, and the BSP is the key to defeat BJP and Mayawati will become powerful,” he added.

Sensing an opportunity to regain her lost ground, Mayawati foresees an important role for her party in national politics post the 2019 Lok Sabha elections if a grand alliance is cobbled up against the BJP. However, known for being a leader who strikes alliances on her conditions, the BSP chief is busy finalising her party candidates for upcoming Assembly elections in the three states.

One of the opposition party leaders, who did not want to be named, feels that three assembly elections is expected to change the scenario of 2019 elections.

Now we are on Telegram too. Follow us for updates
TAGS
Mayawati Opposition unity