When the Nitish Kumar-led government, which enforced a total ban on liquor consumption and sale two years ago, announced a step towards a khaini ban, it was unbelievable to many. Now, their prayers seem to be answered, with the khaini narrowly escaping ban in the eastern state. 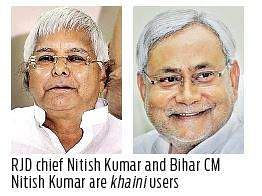 Khaini, a smokeless raw form of tobacco, is generally accepted in almost all segments of the society. Many Bihar politicians, including Nitish and RJD chief Lalu Prasad Yadav, are khaini users. It also has an economic side: Bihar is the sixth largest tobacco-producing state in India.

But, health experts are demanding a ban due to khaini’s links to a rise in oral cancer and ailments of the lungs and the cardio-vascular system. The WHO’s Global Adults Tobacco Survey for 2016-17 pointed out that of the 25.9 per cent tobacco users in Bihar, 23.5 per cent consume smokeless tobacco and khaini consumers account for 20.4 per cent of them. Despite overall tobacco consumption falling from 53.5 per cent to 25.9 per cent in last seven years, the use of khaini was steady.

Spurred by the NGO ‘Socio Economic and Educational Development Society’, the government had announced a step towards banning khaini. Principal Secretary, Health, Sanjay Kumar had said the government would formally request the Centre to notify khaini as a food product under the Food Safety and Standards Act. Khaini’s inclusion in FSSA would have it banned as consumption and sale of any food item containing tobacco or nicotine is banned under this law, he said.

But three days later, the practical difficulties and the fear of a backlash forced the government to give up the idea.

“The move to ban khaini was no more than a gimmick by the government. A ban would have snatched livelihood of lakhs of farmers,” says opposition Hindustani Awam Morcha spokesperson Danish Rizwan.

TOBACCO and Economics
■ Bihar is the 6th largest tobacco-producing state in the country
■ Of the 25.9 per cent tobacco users in Bihar, 23.5 per cent consume smokeless tobacco and khaini consumers account for 20.4 per cent of them*
■ Overall tobacco consumption has fallen from 53.5 per cent to 25.9 per cent in last seven years*
*WHO’s Global Adults Tobacco
Survey, 2016-17

Now we are on Telegram too. Follow us for updates
TAGS
Nitish Kumar Khaini