A senior official said before the commencement of rabi and kharif seasons, the ministry issues uniform specification for procurement of foodgrain for the Central pool.

NEW DELHI: About 57,676 tons of foodgrain stored in Food Corporation of India (FCI) godowns have got damaged and become useless for human consumption in the past five years owing to pest attack, leakage in godowns, exposure to rain and floods, procurement of poor quality stock etc.This amount was sufficient feed more than 1.15 crore people for a month, according to a report by the Ministry of Consumer Affairs. Some amount of foodgrain also gets wasted during transportation in trains and trucks. 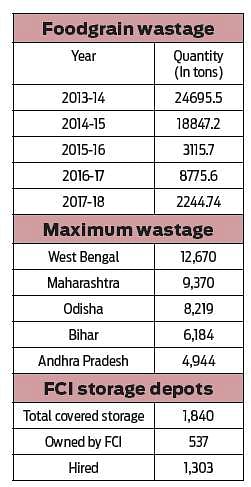 A senior official said every year some part of the country faces bad weather conditions such as heavy rain, flood or cyclone. He admitted that despite every effort, some of the food grain gets damaged.While the government blamed the elements for the wastage, Devinder Sharma, an expert on agriculture, said this was because of inefficiency. “Damage of foodgrain is like a crime. It looks like food wastage is not a priority with the government,” he said

Sharma blamed lack of will among department heads for this. “Foodgrain used to get damaged even 30 years ago but governments have not been able to stop it even now. It does not require rocket science to stop this. It can be done with the available technology. Our entire administrative system has failed miserably in stopping this during all these years,” he added.

Officials said substantial storage capacity for foodgrain had been created during the last three years. This comprised about 23 lakh metric tonnes (LMT) of conventional warehouses and 6.25 LMT of silos. Moreover, the government has also approved a roadmap for the construction of steel silos for a capacity of 100 Lakh MT in three phases by 2020. Private parties selected through tendering process will construct the silos to be taken on guaranteed hiring by the FCI and State agencies.

A senior official said before the commencement of rabi and kharif seasons, the ministry issues uniform specification for procurement of foodgrain for the Central pool. These uniform specifications are circulated to the FCI and departments concerned of all state governments with instructions to ensure that foodgrains are procured strictly as per the specifications.

The official said the foodgrain procured by the FCI is stored in covered godowns as well as in CAP (cover and plinth). During storage, multiple steps are taken for safe storage and preservation of foodgrains. Fumigation covers, nylon ropes, nets and insecticides are provided to all the godowns. Prophylactic (spraying of insecticides) and curative treatments (fumigation) are carried out regularly.

Apart from this, effective rat control measures, both in covered godowns as well as in CAP storage, are undertaken. Stacks are properly covered with fabricated low-density black polythene water-proof covers and tied with nylon ropes or nets.Regular periodic inspection of the stocks and godowns are undertaken by qualified and trained staff and all senior officers.

Stay up to date on all the latest The Sunday Standard news with The New Indian Express App. Download now
TAGS
FCI Food Corporation of India