The Centre has also asked the states to sanction soft loans at agricultural rates for new hospitals and providing services such as uninterrupted electricity at residential rates.

NEW DELHI: Realizing that the existing infrastructure is insufficient to effectively implement its newly launched Pradhan Mantri Jan Aarogya Yojana (PMJAY), the government has prepared a draft policy to facilitate opening of private hospitals in tier II and tier III cities across the country. In an advisory note sent to all states, the Union Ministry of Health and Family Welfare has asked them to ensure easy and fast availability of land for opening of hospitals, facilitate various clearances and permissions under various statutory provisions/departments with specified timelines. 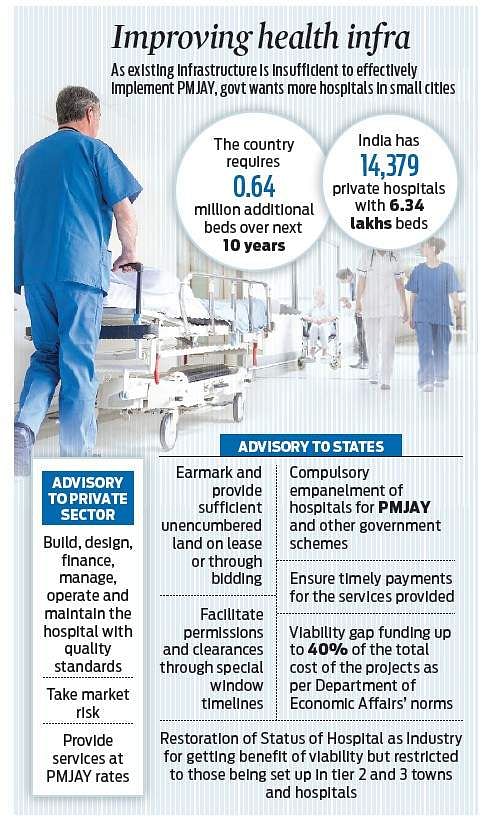 The Centre has also asked the states to sanction soft loans at agricultural rates for new hospitals and providing services such as uninterrupted electricity at residential rates.“India has a huge and growing population but relative to that fewer number of hospitals. The country has one hospital bed for 879 people. This is far below the world average of 30 hospitals per 10,000 populations,” said the note seeking inputs from the states.

“With the launch of the PMJAY and 500 million beneficiaries, there will be a requirement of 0.64 million additional beds required over the next 10 years,” said the draft policy for which inputs have been provided by the Niti Aayog.

“We now need three times more growth but it should be primarily focused on Tier II and III cities. Private players (both for profit and not for profit) have a key role to play in bridging the supply demand gap in health infrastructure while advancing the standards of care,” the draft policy said.

A senior Health Ministry official said three business models had been suggested to the states: the first, in which the doctor owns one or two specialties and the hospital could have 30-40 beds; the second in which a doctor partners a businessman with multi-specialty services and sets up a 100-bed hospital; and the third will be hospitals with more than 100 beds and funded by corporates or existing hospital chains.

However, all three would have to have doctors owning a majority stake. “We have realised that a lack of hospitals will create problems, particularly in states with a large population but very poor health infrastructure such as Bihar, UP, Madhya Pradesh and West Bengal so we need action at the earliest,” he said.

Girdhar J Gyani, director general of the Association of Healthcare Providers of India, welcomed the “private hospital-friendly” policy. “When the government has launched a mega scheme... it will have to ensure they reach smaller towns,” he said.

Now we are on Telegram too. Follow us for updates
TAGS
Pradhan Mantri Jan Aarogya Yojana Private hospitals