Loktak Lake in Manipur, the largest freshwater lake in the Northeast, has emerged as a training facility for budding as well as established sportspersons in recent years.

IMPHAL: Loktak Lake in Manipur, the largest freshwater lake in the Northeast, has emerged as a training facility for budding as well as established sportspersons in recent years. Many water sports such as sail boating, waterskiing, windsurfing etc. are being promoted and practised there.

The security forces have set up a training facility, a water sport park and also amenities for tourists have around the lake. “We have ensured that we take advantage of the peaceful situation here. As you know, Manipur is a hub of sportsmen with many athletes representing India at the international level, so we set up a training facility in the lake,” said an officer of the Assam Rifles, which is stationed at Loktak to oversee security in the area.

Many athletes wearing the Indian jersey can be seen practising in the Loktak waters. Rowers and canoe sprinters are seen on the southern tip of the lake.

It wasn’t always like this. About a decade ago, the lake and its surrounding areas were a hub of the insurgents. Places like Ishok and Keibul Lamjao National Park in Loktak Lake served as the headquarters of insurgent groups like the Kanglei Yawol Kanna Lup and the United National Liberation Front for a few years.

“Till about 2009, Moirang town, which is about 8 km from the lake, and other surrounding areas were teeming with insurgents. The phumdis in the lake served as a perfect hideout for them. Now, for the past 10 years the areas has been largely peaceful and has seen a lot of development,” the Assam Rifles officer said.

Phumdis are masses of vegetation in the lake which float around due to decay from the bottom. Some of the phumdis are so large that people have constructing makeshift huts on them. “Earlier, there was a restaurant in one of the phumdis and another one housed a school,” the officer said.

In the past, security forces have carried out at least 12 anti-insurgency operations like Operation Loktak, Operation Stinger and Operation Summerstorm. “The terrain was unfamiliar to us and provided easy cover for the insurgents. So, we acted based on specific intelligence. We have also devised a boat operation by which we can identify, apprehend and if need be, eliminate the insurgents,” the Assam rifles officer said.

With the insurgency levels going down significantly, Bishnupur district, where the lake is located, has been adjudged the best district in Manipur. Residents of 60 villages surrounding the Loktak Lake, with a combined population of around one lakh, admit that the situation has improved. They are happy with the return of calm and peace in the area, as their children can now pursue training in water sports peacefully.
“The training facility which has come up in the lake, apart from helping athletes, is also serving as an inspiration to our children. I have two kids and both of them want to be rowers. I hope the peace and tranquility remains here so my children can fulfill their dreams. We cannot thank the security forces enough for bringing back normalcy to the area,” said 32-year-old L Pushpa Rani Devi.

H Rajesh, 56, a resident of Moirang, said, “Earlier, it used to be very difficult for us to even go from Moirang to Loktak. The situation has vastly improved now. There is a resort near the lake and also places from where the lake can be viewed. Now when we visit the lake, we do not fear for our lives.”
According to security forces, the number of tourists visiting the lake has gone up in the past one year.

“The main reason for the increased footfall of tourists over the past one year is the strict implementation of confidence-building measures. We have initiated activities like tree plantation and women’s groups like Meira Paibi have been instrumental in helping normalcy come back to Loktak,” the Assam Rifles officer said.

With the return of peace, the tourism potential of Keibul Lamjao National Park has returned into focus. “It is the world’s only floating national park and also serves as a home to Sangai deer, which is found only in Manipur. But people were scared to come here earlier. Now, with the Sangai Festival approaching, we expect a record turnout this year,” the officer said.

Chief Minister N Biren Singh is upbeat about the upcoming Sangai Festival. “Just to emphasise on the returning normalcy, the Sangai Festival this year is being attended by the Princess of Thailand and the US ambassador to India,” he said. 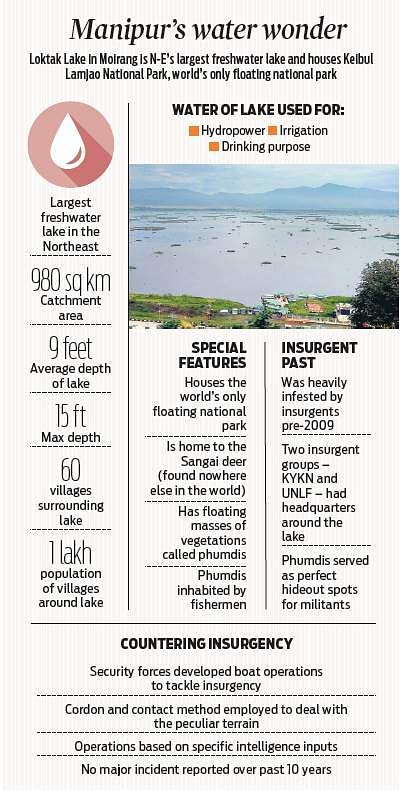 Now we are on Telegram too. Follow us for updates
TAGS
Loktak Lake Assam Rifles Manipur's Sports Hub Sports Hub on Water