Papier Art Exhibition unfurls the possibilities of paper. This impressionable medium transmogrifies itself into various forms, making its relevance all the more befitting to its versatility.

From papyrus in 3000 BC to paper in 100 BC, the material has travelled through history as the keeper of memory. It continues to safeguard the written word. With seamlessness, this impressionable medium transmogrifies itself into different forms, making its relevance all the more befitting to its versatility. Its wide use for writing, packaging and printing are established, but when it converts itself into art, its purpose goes from being functional to intuitive.

Through its inventiveness, manifests creativity abound, and it’s this act of creating that gives birth to personal anecdotes. For Gopika Chowfla, her romance with paper begins with old books. They help her recycle memories and look at how the residue of the past imposes itself on the present. The stains of history on the pages of today, she says. In a group exhibition called Papier Art Exhibition, she  engages with the medium to unfurl what else she can find.

Her work doesn’t come with specificity. They are impulsive. “They have used imageries like free verses, streams of consciousness or magic realism. The images may tangentially refer to a story or a moment in a story, but if I make a literal connection, it will ruin the experience. The pages of the book are only a resting place for my captured images,” says Chowfla.

Some representations like the hands and the tree are clearly recognizable but there are others that require contemplation. “These paintings are almost a form of vandalism, aren’t they? They deface a previous work, in a sense, to construct new layers of meaning derived from present experiences,” she says. 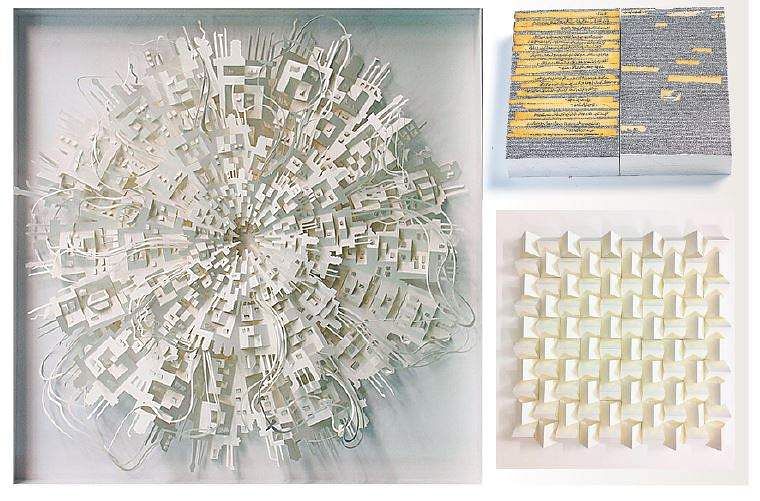 The three primal colours—red, black and white, have been used in Chowfla’s musings. She has used them for the simplicity and starkness with which they overlay themselves on old printed words. Watercolours have been used for transparency as they allow some sense of what is below, to come through. “For me these books, which belong to my past, represent my own stories and here, I’ve layered them with seemingly unrelated imagery, partly because that is what has happened in my head. A complex layering of memories have resulted in this interpretation. A creation of new stories that have evolved from words into pictures,” says the artist.

Besides this show, Chowfla will continue exploring perspectives on food and flesh, a subject she’s been working on, through photography based installations. She is readying a series of hand embroidered paintings that are in response to all the brouhaha around the eating of beef as well as the politicising of food.

The exhibition sees paper perspectives by other artists a well. Jignesh Panchal, Sachin George and Sachin Tekade use white paper for architectural and natural forms. Chetnaa explores paper for the play of light, fleeting transitions and a labyrinth of shadows. Sudipta Das sculpts paper to create installations that are comments on society, while Shormii Chowdhury has worked out paper scrolls for storytelling. Aisha A Hussain works on blank white pages, which resembles a personal daily diary  with records of different things.

All through these interpretations, paper submits itself to metamorphosis of purpose, fitting into whatever mould it is set into. September 30: 11 am  to 7 pm, Gallery Art Positive, Lado Sarai.

IN A NUTSHELL
Papier Art Exhibition unfurls the possibilities of paper. This impressionable medium transmogrifies itself into various forms, making its relevance all the more befitting to its versatility

Now we are on Telegram too. Follow us for updates
TAGS
Paper Gopika Chowfla