Kashmir: A stone’s throw away from peace

Just as Kashmiri youth were moving towards normal life with incidents of stone pelting down by almost 98%, the deployment of heavy troops has put the Valley on the edge afresh, discovers Fayaz Wani.

NEW DELHI: The Central Armed Paramilitary Forces have taken over the entry and exit points in Srinagar, even as rumours are spreading like wildfire in the Valley. The first spark came last week when 10,000 troops were rushed to the Valley, and leaders across parties in Kashmir began to worry about a ‘Herculean’ change in the Valley.

All eyes were on the Governor Satya Pal Malik, as 28,000 more troops were rushed in on Thursday, and tourists were asked to leave the Valley with immediate effect.

This move only added to the confusion, mystery and tension in the Valley. Former CMs Omar Abdullah and Mehbooba Mufti sought clarity from the Centre even as locals began stocking up on essentials fearing the worse.

The restless youth that had moved away from the wave of stone-pelting are an anxious lot. Just as the statistics were showing a peaceful trend in Kashmir, the sudden movement of troops has undone the multi-pronged work by local authorities, security agencies and intelligence networks.

As per MHA figures, stone-pelting incidents have come down from 2,600 in 2016 to 40 in first half of 2019. However, with the latest development in the Valley, all that good work may go down the waste.

“It would be wrong if I say I am not concerned. What’s in the future? I, like most, don’t know. These are strange times. For people like us, it’s so confusing sometimes”, said 21-year-old Naseef, a student at Kashmir University.

“What’s normal,’ asks Ujair, another student, adding, “Does anyone have the answer to that?”

Srinagar looks much normal compared to even a year back-its peripheries, rarely punctuated with the report of explosion’s- then echoing off the mountains in a series of dull thuds.

“It’s moving away. From Lal Chowk, the centre of all tumult in the early 1990s, the action has shifted. It’s more to south Kashmir now. But it’s a relief that even kids are no more into stone pelting and the bandhs and boycotts, which so upset life, are getting fewer and far between. I don’t know if this is normalcy as most would want it. But it’s more normal than yesterday. I’ll celebrate the lull and the new normal though,” Samad, 41, intervenes cryptically.

Stone pelting incidents in the Valley, which had peaked in 2016, have indeed come down drastically this year. Even in downtown Srinagar, youths used to stage protests and indulge in stone-throwing on security personnel after the conclusion of Friday prayers every week.

“Those are in the past,” said a wizened man, expressing a sense of relief. 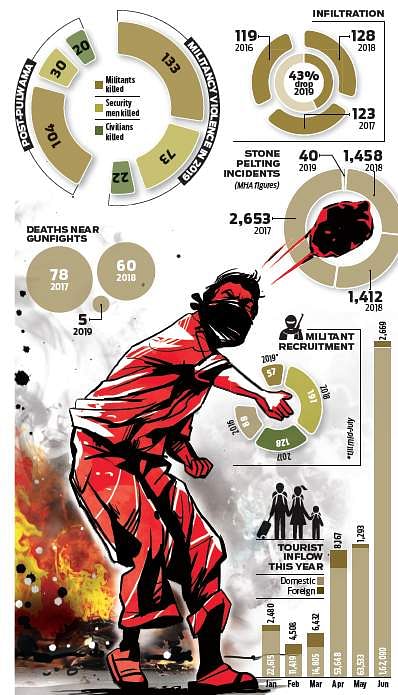 In Nouhatta-once the nerve centre- an elder recalled how after Friday prayers “the area would turn into a free for all- a battle zone.’

Youths clashed with security men and the resultant tear gas shells and pepper gas charges would fill the entire area with smoke. The very young and the elderly suffered most. It’s no more so.

The drop in stone-pelting is not only visible in Srinagar but in militancy-hit south Kashmir comprising four districts of Anantnag, Pulwama, Kulgam and Shopian.

Peace in the Valley
On May 24, Kashmir remained peaceful despite top militant commander and Al Qaeda linked Ansar Gazwat-Ul Hind (AGH) chief Zakir Moosa being killed in an encounter in Tral area in south Kashmir.

The killing of Zakir-a close aide of slain Hizb commander Burhan Wani and also his successor- did not trigger Valley-wide protests as was the case on July 8, 2016, when Burhan was killed.

Some thousands participated in the Zakir funeral as compared to a lakh who attended Burhan’s on July 8, 2016, despite authorities imposing Valley-wide curfew.

“In some cases, we acted tough and booked the habitual stone-pelters under Public Safety Act and lodged them in jails. In some, we followed the stick and carrot approach with opportunity for reform,” said an officer.

“The security agencies felt that Jamaat workers and leaders were inciting protests.

ALSO READ | After UK, Germany issues advisory against travel to Jammu and Kashmir

“The important people (ring leaders) were jailed. There were others-not leaders but participants in stone pelting-against who we had records. Officers were given the discretion to bond them through peer and community pressure. Elders, local imams, family members, neighbours and teachers of the boys- some dozen people stood bond for every such boy keeping out of such incidents. The compassionate approach helped.”

Citing an example, Kumar said a few days back two militants were killed in Shopian. Barring a symbolic shutdown, there was none of the usual protests.

“We are following multiple approaches at several levels to restore peace and normalcy in the Valley,” Kumar said.

He said, even the NIA crackdown on separatists and stemming of the illegal money and drug trail have helped.

While this has curbed shutdown calls, the NIA is investigating their role in funding militancy and anti-India activities in the Valley.

The moves staved shutdown calls in the Valley when Union Finance Minister and BJP chief Amit Shah visited the Valley. Neither were there protests when President Ram Nath Kovind participated in the Kargil Diwas function. This was unimaginable earlier.

“Many youths were killed within days after their joining militancy,” he said.“Of the 57 youth who joined militant organizations this year, 23 were killed and 16 returned home, thanks to families lending counsellors a hand. This compares favourably with 191 youths joining militants in 2018,” officers say.

However, Advisor Kumar believes anti-militancy operations cannot be stopped. Since the February 14 suicide attack by Jaish militant on CRPF bus at Lethpora, Pulwama, in which 40 CRPF men were killed, 104 militants have been killed among them many top militant commanders like Zakir Musa, Zeenat-ul-Islam, Munna Lahori, Rashid Ghazi and Kamran.

This came about with better intel coordination and assets on the ground.

“The advantage can’t be lost,” he said.

It’s not that as if the civilian government acting alone has changed the situation. Coordinated efforts with the Army and the para-military have pepped up the counter-infiltration grid along the Line of Control (LoC).

The dipping militancy levels show up in the ease with which the administration accomplished the “Back to the Villages’ development programme- top officials visiting 4,500 blocks and villages for the first time to connect with ordinary folks.

The incident-free Lok Sabha polls, as well as the urban and panchayat bodies polls, despite the low turnout, were a testimony to the efforts on the ground.

Says Advisor Vijay: “The larger attempt is to usher peace with development. We have excellent plans for the Valley and Ladakh, which will help mobility and employment. That will happen sooner,” he said.

It’s not that the wariness has melted despite the relative peace and quiet.

In downtown Nauhatta-once the hub of militants and separatists- the environment is quieter. So is the scene at Jawaharnagar or the famous and busy Boulevard.

It’s another thing that custom, late evenings, is fewer. Some shops still close sooner but more are open.

Tourism too is looking up, giving some hope to the Shikara and houseboat trade and artisans who make the lovely ‘Cashmere’ artefacts.

Tourism officials say, after first three months of a lull this year, tourist flow into the Valley has marked an uptick since April when 53,648 domestic and 8,167 foreign tourists visited.

Houseboat owner and former president of J&K Houseboat Owners Association G R Shah too admitted that tourist inflow has slowly started to pick up and occupancy has climbed to 40% from a dim 10-15% at the start of the year.

Now we are on Telegram too. Follow us for updates
TAGS
srinagar Kashmir Valley Satya Pal Malik