Every night, from 10 pm, passengers bound for long-haul destinations, start gathering in large numbers opposite Akshardham Temple. Families lugging heavy baggage could be spotted waiting on the sidewalk for a ride. Soon, nearly a dozen tourist buses, bound for destinations in Uttar Pradesh, roll in and literally jostle for parking space with other vehicles. 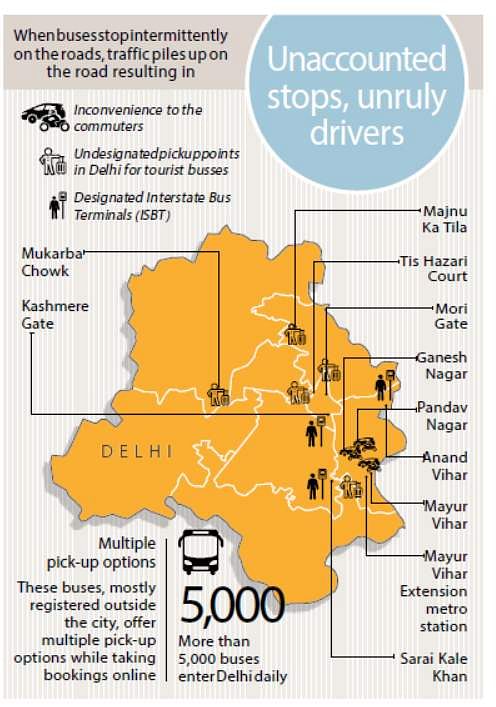 Passengers, most of whom book their tickets online, are seen thronging the roads and sidewalks trying board the buses parked erratically.

“I started from ITO, took the loop before the red light at Laxmi Nagar intersection before taking the stretch opposite Akshardham Metro station to get onto the Delhi Meerut Expressway. However, it was a flyover from where the traffic got from bad to worse. While interstate buses were parked haphazardly on the left of the stretch, there was a long line of cabs waiting to pick up passengers,” Pradeep Sharma, who lives in Ghaziabad and works at ITO, said.

“We do stop at Anand Vihar, ISBT, but we also pick up passengers on the way from here (Akshardham),” the conductor of a bus bound for Faridabad said.
During a spot visit, transport officials were seen standing at the end of the ITO loop, mostly checking trucks. Barely a few metres ahead, opposite the Akshardham Metro station, the scene was nothing short of chaotic with many vehicle owners, trying to get to Pandav Nagar from the wrong side, bringing traffic to a crawl on the stretch below the flyover.
“However, since these buses don’t have the necessary permits to ply, they are illegal,” K Jegedesh, Joint Commissioner of Police, Traffic, said.

Now we are on Telegram too. Follow us for updates
TAGS
Delhi Mayur Vihar