Brands Going gaga over Yuvraj: Is it for love or a free-ride?

Yuvraj Singh’s retirement last week opened the flood-gates for an unbelievable number of congratulatory ads by various brands, mostly in digital media. The overwhelming recurrent theme of most of the memes, of course, was the record-breaking feat of 666666 in just one over by the veteran southpaw in the 2007 T20 World Cup when he pummelled Stuart Broad to create a world record, and hoist a personal milestone, that will surely not be forgotten in a long long time.

Creative teams across agencies vied with each other to write the wittiest, cleverest and bestest lines to salute the Crown Prince of Indian Cricket. The FE VI VI VI VI VI VI COL meme was brand-rooted; so also was the 666666E Instagram post of Indigo. The Manforce ‘Thank You For All The Balls Smashed’ was category specific for sure! Amul was witty as ever, ‘Sabke Chhakke Chhudaa Diye … Amul … Yu Love It, Vi Love It’. Swiggy was equally funny with its retirement wishes ‘… to the second most epic thing to come out of Punjab (After butter chicken of course!)’. 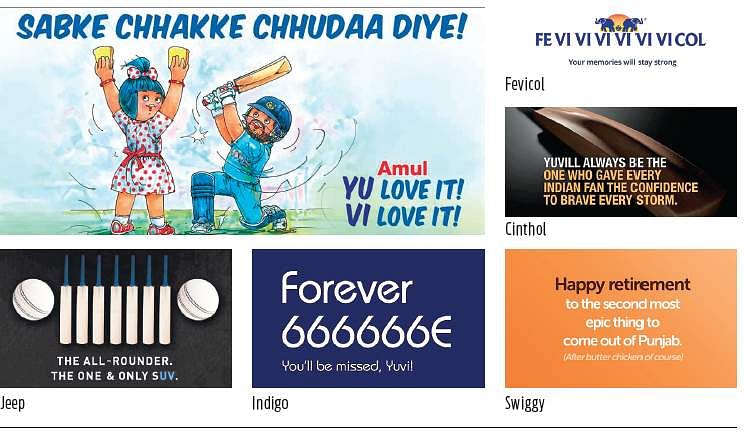 The Jeep ad played on the All Rounder SUV with UV in a different shade. Cinthol put out an elegant creative on Confidence, its own brand promise. There were posts by Mumbai Indians, Zomato, Nearbuy, Eicher, YouTube, Netflix, Hotstar, Ixigo, McDonald’s, Kingfisher, Spartan Poker, Bewakoof.com, Star Sports and many more. Lyrical in praise. Dripping with nostalgia. Tearful in goodbyes.

In many ways, it was nice to see such a massive outpouring of love and admiration for the retiring Yuvraj. Testimony to all the love he earned over the years, visible gratitude for his unparalleled contribution to Indian cricket. But, there was a tiny little doubt that kept niggling in one far away corner of my advertising mind. Were these brands actually and truly enamoured of Yuvraj or were they all just taking a free-ride on his brand equity? Not very far back, young Prithvi Shaw had fired off legal notices to some brands that put out congratulatory ads on his maiden test century.

His contention broadly was that these brands were just skimming off his fame. That they were ‘passing off’ a connect to him without any valid commercial relationship with him. In Yuvi’s case, most of the love and admiration is surely genuine and bereft of ulterior motives, but I do see an increasing motivation amongst brands to ‘seize the moment’ on such occasions where brand messaging can be quickly conceived and tailored to a news event as it unfolds.

You could call it topical communication. Or opportune marketing. Or ‘Moment Marketing’ as some modern ad-gurus call it. Some like Amul has done it for decades. So you know they are genuine. Some like Manforce have shown visible alacrity of late (like the recent Sunny Leone dig at Arnab Goswami). Similarly Swiggy. Alert, tongue-in-cheek. Always smart-alecky. Zomato too. Not as good, but tenacious for sure. As for the others, I am happy if the congratulatory posts were just pure genuine love. If not, Yu would all be sad, Vi would all be wronged. (The author is an advertising and media veteran.)

Now we are on Telegram too. Follow us for updates
TAGS
Yuvraj Retirement