Can a full-strength Supreme Court dispose its pile of pending cases?

NEW DELHI: Despite increasing the strength of judges to nearly four times from 1950 to 2019, pendency still haunts the Supreme Court of India.

A mere look at the data also reflects how the number of cases filed in the apex court rose from 1,215 in 1950 to 58,669 till June 1, 2019, making it one of the most overburdened constitutional courts in the world.

The sanctioned strength of judges in the Supreme Court, which came into existence on January 28, 1950, two days after India became a republic, was eight at the time of its inception, while it is 31 now. However, the full quorum is for few months only as two judges will retire this year. 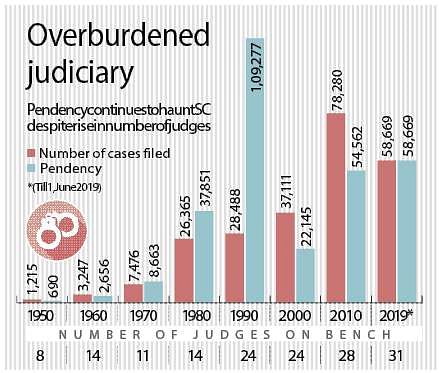 SC’s pendency problem originated in 1970s and in the decade before the Emergency, the court disposed on an average 6,538 cases a year with an annual backlog of around 10,000 cases.

This ratio increased with a backlog of 28,264 cases and in 1991, the pendency crossed one lakh cases. In 1993, the court began the exercise of classification of cases and similar cases began to be clubbed together. This resulted in reducing the backlog significantly. Since then, the pendency ranged from 19,000 to 60,000 cases on an average.

But if one look at the last ten years, an increase in the number of working SC judges has not had a significant effect on its pendency. The key reason for this mounting of pending cases can be attributed to shifting the role of the SC from adjudicating cases of constitutional significance into a regular court of appeals.

According to legal experts, most of the cases that the SC is handling on a daily basis are either appeal from various high courts or cases of gross violation of an individual’s fundamental rights. But this role was never meant for the apex court. It is because of the frivolous PILs and various government policies which are challenged by people that take up most of the judiciary’s time that it hardly gets into its main role of handling constitutional cases.

Stay up to date on all the latest The Sunday Standard news with The New Indian Express App. Download now
TAGS
Supreme Court