They say they cannot be forced to speak Bangla, though most already know the language.

KOLKATA:  The non-Bengali communities, who have been living in West Bengal for decades and also those who have shifted here for professional reasons, expressed displeasure over the chief minister’s diktat over the Bengali language. They said it’s the opposite of what she had said a few years ago in the wake of rising incidents of intolerance in the country.

Playing the Bengali card for the first time after the Trinamool received a jolt in the Lok Sabha elections, Mamata, while addressing a rally in Barrackpore, said, “When I go to Bihar, Uttar Pradesh or Punjab, I speak in their language. If someone is living in Bengal, he or she has to learn Bengali.’’“In 2015, she (Mamata) had criticised the BJP and said how can a political party dictate people’s choice of food and clothes? Now, she is dictating the language people should speak in. I never expected it would happen in a state like West Bengal,’’ said Aditya Mundhra, whose forefather had moved to the state around 100 years ago. 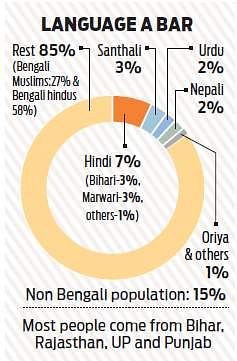 Around 15% of the present population —13 million —in Bengal are non Bengalis. A large number are from Bihar, Rajasthan, UP and Punjab are settled in Kolkata. Most people from Bihar work in the state as labourers while Marwaris are businessmen and control the Burrabazar area — the largest business hub in Kolkata. In private healthcare services, a large number of nurses are from South India. Most of the business tycoons in Kolkata are non-Bengalis. Non-Bengalis are also spread in other parts of the state including Siliguri, Asansol, Durgapur, Purulia and Kharagpur.

“We prefer nurses from south as they serious about work. They are 80% of our nursing strength,’’ said an official of Apollo Gleneagles Hospital. Most non-Bengalis living in the state for long can speak Bengali. “When I speak to the people from my community, I prefer to interact in my native language. But when I deal with Bengali customers, I speak in Bengali. But how can someone force me to speak in Bengali?’’ said Ramshankar Agarwal, a Burrabazar businessman.

There are many youngsters, who have made Kolkata their home for professional reasons, and are yet to be comfortable with Bengali. “I joined the Kolkata office eight months ago. I am from Jodhpur. I speak in English in my office. When I deal with shopkeepers and vegetable sellers, I interact in Hindi,’’ said Sandeep Nath, an IT professional.

Now we are on Telegram too. Follow us for updates
TAGS
West Bengal Bengali Bengali language