NEW DELHI: India on Saturday issued fresh reprints of maps for Jammu and Kashmir, post-bifurcation, marking Aksai Chin and Gilgit — part of which is controlled by China — within the extended UT jurisdiction of Ladakh, thereby reiterating its sovereign rights over the disputed areas.

The subtle geo-strategic reminder comes despite Chinese objections to abrogation of provisions of Article 370 and creation of  Ladakh as a UT, saying India was trying to ‘unilaterally change the status quo,’ which would not be without repercussions.

The Ministry of External Affairs (MEA) had earlier countered Beijing saying, that by taking control of part of Pakistan Occupied Kashmir, it was China which was in illegal control of Indian territory.

The Union Home Ministry issued a notification on Saturday detailing the boundaries of the newly created Union Territories of Jammu and Kashmir, and Ladakh. The notification also resulted in a new political map of India - one that shows Pakistan occupied Jammu and Kashmir in the UT of J&K, besides Gilgit-Baltistan, Gilgit Wazaratbad and Aksai Chin within the newly carved UT of Ladakh. 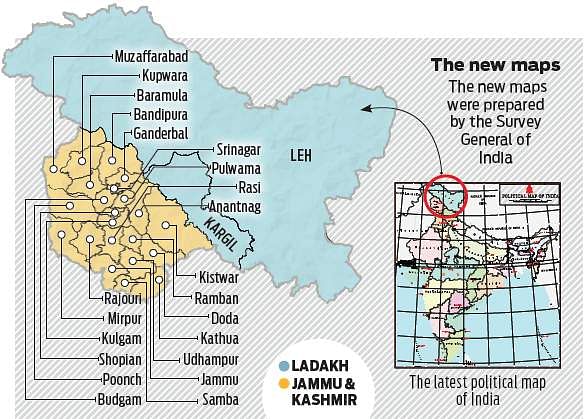 The official statement said the new UT of Ladakh consists of two districts namely Kargil and Leh. Rest of the former undivided state of Jammu and Kashmir is the new UT of J&K. Recently, China Foreign Minister Wang had told India’s Foreign Minister S Jaishankar that India’s announcement of the establishment of Ladakh Union Territory, “which involves Chinese territory, has posed a challenge to China’s sovereignty and violated the two countries’ agreement on maintaining peace and stability in the border region.”

On October 31, India strongly responded to China’s charge saying, it was China which was in illegal control of part of POK, which was Indian Territory. Earlier, on August 6, a day after the Narendra Modi government abrogated J&K’ special status, Home Minister Amit Shah said in Parliament, “When I talk about Jammu and Kashmir, Pakistan occupied Kashmir, Aksai Chin is also included in it.”

After Pakistan approached UNSC and the United Nations seeking intervention in the Kashmir matter, Union Defence Minister Rajnath Singh had said any future talks on Kashmir will be just about PoK and that J&K was not a bilateral subject. The new maps reiterate that in any future India-Pakistan bilateral engagement, issues concerning J&K will not be on the table.  The latest policy shift has put both Pakistan and China on notice, especially because the China-Pakistan Economic Corridor (CPEC), passes through Gilgit-Baltistan.

Since 2017, India maintains that China’s Belt and Road Initiative project undermines India’s sovereignty in the form of the CPEC which runs through the disputed territory of Pakistan occupied Kashmir. India had said, “No country can accept a project that ignores its core concerns on sovereignty and territorial integrity.”

The two new UTs
The new UT of Ladakh consists of two districts — Kargil and Leh. Rest of the former undivided state of Jammu and Kashmir is the new UT of J&K.  Leh has been defined in the J&K Reorganisation (Removal of Difficulties) Second Order, 2019, issued by the President, to include the areas of the districts of Gilgit, Gilgit Wazarat, Chilhas and Tribal Territory of 1947, in addition to the remaining areas of Leh and Ladakh districts of 1947, after carving out the Kargil District.

Now we are on Telegram too. Follow us for updates
TAGS
Aksai Chin Jammu and Kashmir Indian Map Gilgit ladakh union territory