Free, are we? British Drag Queen shares her thoughts

In all her shows, British Drag Queen Virgin Extravanganza uses humour to talk about dark things like homophobia, prejudice, and discrimination that hinder freedom.

British Drag Queen Virgin Extravanganza is unstoppable with her unabashed banter and gregarious witticism. She is used to drawing second glances but according to her, curiosity is a good thing. “It makes you ask questions and look for the right answers,” says the drag-queen, dominating the stage at the Kitty Su, where she performed in her quintessential songstress style and humour laced with sarcasm and well-timed quips.

She was in India for The Lalit Suri Hospitality Group’s Freedom Tour, held to celebrate September 6, the date the Supreme Court obliterated Section 377 last year.

The hotel organised a series of events that got together members of the queer community to reiterate the value of freedom of sexual representation. “That day is akin to August 15 (Independence Day) for us. But we must remember, we’ve won a small battle. The war for equal rights still rages. We hope that people talk about the next steps... marriage and other equalities,” says Keshav Suri, executive director of the group. 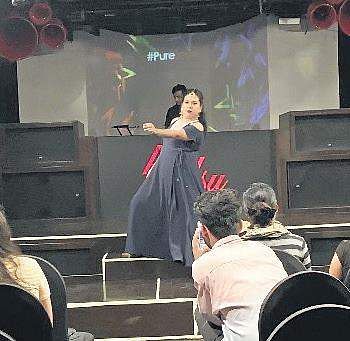 For Andrew Burt AKA Virgin Extravanganza, 35, who hails from a small town in Oregon, USA called Talent, her drag name, Virgin, is based on the Virgin Mary.

She was raised catholic and was bullied at every step of childhood for being femme and wearing dresses in public. “I loved the Virgin Mary. I loved looking at her statue in church and identified with her. She was a figure to be looked at and not heard.

Held as a symbol and not to be understood. I felt very misunderstood throughout my childhood, so I wanted to give a voice to The Virgin that the Bible did not,” says Extravanganza.

In all her shows, she uses humour to talk about dark things like homophobia, prejudice, and discrimination that hinder freedom. “Virgin Mary is a very tragic character to me. She gave her body to God to create a son who died brutally for what he believed. The girl has to have a sense of humour or how else can she survive?” says the drag artiste.

ALSO READ | One year after historic Section 377 verdict, coming out is still not easy in India

The repercussion of what occurred all these years may not be emotionally reversible but healing is possible. “We need to move forward as a community that not be persecuted for who and what we are. The future is bright and it can only get brighter. Even if that’s just a hope, its what we all have to believe to make things better,” she says.

‘Freedom’ might coincide with ‘independent’, but I wish to be dependent on someone but not bound by patriarchy. Freedom for me is to live by my terms and conditions but aligned with rules of the society for a balanced outlook.

My journey has been happy. This made me closer to my parents and family. But I still yearn for respect from society Avantika Gurung, identifies as a transwoman