Wasting ground water in the country may soon invite penalty

The ministry has submitted directions in this regard for approval to the National Green Tribunal (NGT) following a case related to containing wastage of ground water.

NEW DELHI:   With over 25 per cent decrease in per capita water availability expected by 2025, Union Jal Shakti Ministry wants all states to evolve and implement mechanisms with coercive measures, including penalty, for wasting ground water. The ministry has submitted directions in this regard for approval to the National Green Tribunal (NGT) following a case related to containing wastage of ground water.

“The concerned civic bodies dealing with water supply network in the states/Union Territories, whether called as Jal Board, Jal Nigam, water works department, municipal corporation, municipal council, Development Authority, Panchayat or by any other name, shall ensure that there shall be no wastage or misuse of potable water tapped from underground and evolve compliance mechanism with coercive measures for violations,” said the directive prepared by the ministry’s Central Ground Water Authority. 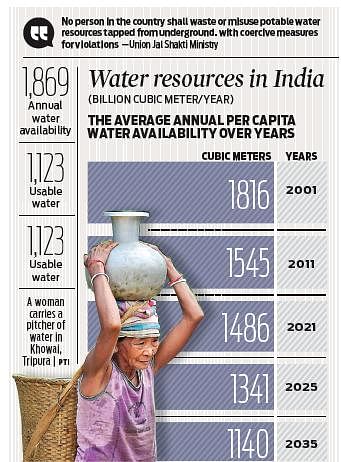 It further said that no person in the country shall waste or misuse potable water resources tapped from underground.

The NGT had directed the ministry that regulators should ensure wastage of water is not profitable and the cost of such wastage is recovered.

As per Report of National Commission on Integrated Water Resources Development, the total water availability of India received through precipitation is about 4,000 billion cubic metre (BCM) per annum and after evaporation, 1,869 BCM water is available as natural runoff to topographical and other factors.

The utilisable water availability is limited to only 1,122 BCM. According to estimates, the average annual per capita availability between 2011 and 2025 has reduced by 25 per cent and would further reduce to 36 per cent by 2035.

“It has been observed that there is lack of awareness on the part of the public in using the groundwater resulting in wastage through the overflowing overhead tanks, excessive use in flushing in toilets, wastage of water in bathing/wash basins/kitchens etc. …There is substantial loss of water due to leakage during transmission/ distribution…,” said UP Singh, secretary, Jal Shakti Ministry.

Now we are on Telegram too. Follow us for updates
TAGS
Union Jal shakti Groundwater preservation