Delhi Assembly elections: Free DTC rides not a reason for most women to vote for AAP

Shashi Joshi, who expressed satisfaction with AAP-led government in the state, opined that there was no benefit of free rides per se.

NEW DELHI: While a majority of women said that free bus rides were a “good step”, most, even AAP supporters, said they were not a factor for them to vote for the party. The voters that this reporter spoke to, spoke in similar terms of development or national security that hinted that their support was with AAP or BJP. Asked if deployment of female marshals and free bus rides influenced them in support of the ruling AAP, most said that many other initiatives taken by the party were “equally important”.

Surprisingly, among those who questioned the government for “unnecessarily” providing facilities for free were women who are educated and financially independent. “Free bus rides are a bait. I am against it. Nothing should be free. We won’t rise to the bait,” said Sumitra, 46, who lives on Pandara Road. For the woman, “issues of national security are more important than anything else”. “We want peace in the state. There has been major turmoil of late. We want freedom from that,” she said. Some others agreed.

Shashi Joshi, who expressed satisfaction with AAP-led government in the state, opined that there was no benefit of free rides per se. “What is the benefit?” “With this, some are benefitted. Not everyone. The schemes should be for all and not just for one section,” the 47-year-old,who lives in Lodhi complex, said.
Meena Devi and her daughter Shivani Jain said they cast their votes on the issues of development and hailed the government for providing them with free bus rides. 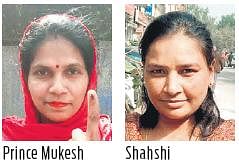 “There is an obvious benefit of the free bus rides. Every family gains from it. For the male member, who may not get to ride free, there is a relief as he also contributes to the finances. In most cases, men bear the financial burden,” said Jain. A 38-year-old woman who lives in Seva Nagar said that other aspects “shouldn’t be ignored” (when) he (Kejriwal) is doing so much for his people”. Thirty-four-year-old Rajlakshmi said it was “very important” for the existing facilities to continue. Prince Mukesh, 41, who hails from Kerala, said in her more than decade-long time in Delhi, she saw “huge difference” in last five years. Apart from water, electricity, health and education, Mukesh appreciated the government for “making the city safer for women,” she said. “We have somewhere to go and report about crimes against us now,” she said referring to DCW.  Shashi, who lives in Rajinder Nagar, said: “Efforts are being made in every field. Kejriwal is doing something, unlike others.”

Stay up to date on all the latest The Sunday Standard news with The New Indian Express App. Download now
(Get the news that matters from New Indian Express on WhatsApp. Click this link and hit 'Click to Subscribe'. Follow the instructions after that.)
TAGS
AAP free bus rides Delhi Delhi Assembly elections