Tamil Nadu and Uttarakhand also have a significant of number of hospitals barred from treating patients under the health insurance programme.

NEW DELHI: Maharashtra and Uttar Pradesh have reported maximum frauds by private hospitals among the states when it comes to the Centre’s big-ticket Pradhan Mantri Jan Arogya Yojana (PMJAY).
Of the total 205 hospitals de-empanelled from the scheme, nearly 60 per cent are from these two large states. This number stands at 45 for Uttar Pradesh, which is among the worst performing larger states under the PMJAY.

The data shared by the National Health Authority, which runs the PMJAY, showed that 75 hospitals in Maharashtra have been de-empanelled, so far. Tamil Nadu and Uttarakhand also have a significant of number of hospitals barred from treating patients under the health insurance programme. Despite claims of robust IT anti-fraud systems, the health scheme has also registered a whopping 18,681 cases of frauds so far. 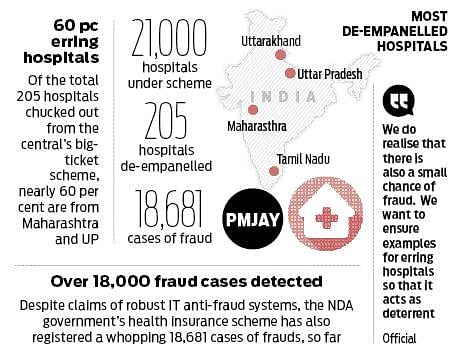 Officials in the Authority maintained that the IT system was designed with checks and balances, along with defined roles and responsibilities, role-based log-ins and audit trails for all processes-beneficiary identification, transaction management, funds flow and claims payment.

“The process of pre-authorisation was designed to ensure maximum efficiency while avoiding abuse and fraud. However, we do realise that there is also a small chance of fraud in such insurance schemes,” said a senior PMJAY official. “We, therefore, want to ensure exemplary punishments for erring hospitals so that it acts as deterrent for others,” the official added.

Stay up to date on all the latest The Sunday Standard news with The New Indian Express App. Download now
(Get the news that matters from New Indian Express on WhatsApp. Click this link and hit 'Click to Subscribe'. Follow the instructions after that.)
TAGS
PMJAY fraud cases Maharashtra Uttar Pradesh