Most of the water disputes were witnessed in Maharashtra and Bihar, two states that have suffered severe drought in recent years.

NEW DELHI: The increasing water crisis in the country and the resulting disputes arising out of it are reflected in the latest National Crime Records Bureau report released two days back, with cases of water dispute in 2018 almost twice the number in 2017.

Most of the water disputes were witnessed in Maharashtra and Bihar, two states that have suffered severe drought in recent years. The disputes resulted in petty crime, clashes and even murders. According to the 2018 NCRB report, the number of water dispute cases registered under the Indian Penal Code was 838, up from 432 in 2017. This constituted a jump of nearly 94 per cent. The cases were registered under Section 147-151 IPC for rioting. 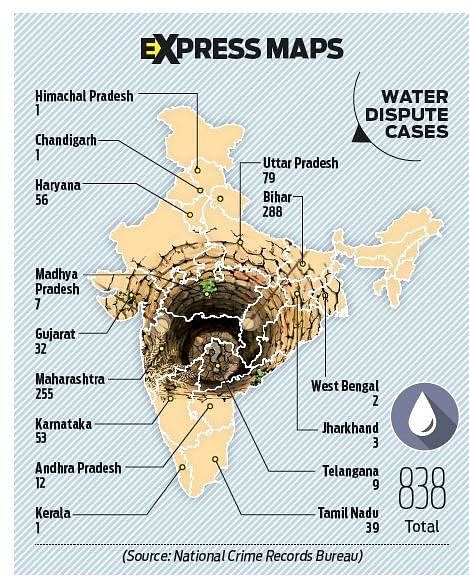 What could be more worrying for the authorities is that as many as 93 cases of murder were reported from across the country, a majority of them in the drought-affected states of Gujarat, Jharkhand, Maharashtra, Karnataka and Rajasthan.  The NCRB brought out water dispute data for the first time in 2017. Experts said the data suggested crime taking place over water distribution between communities, caste and villages. “When water scarcity increases, conflicts go up and it can be inter-sectoral, community level and between urban and rural areas. We saw a very bad situation in some of these states in 2018,” said Himanshu Thakkar, coordinator of South Asia Network on Dams, Rivers and People (SANDARP).

Expressing concern over the rise in water disputes, former union water resources secretary Shashi Shekhar said inequitable distribution of water between communities was the main reason for crime-related to water. He said communities should be involved in water management.  “India exploits maximum groundwater. The amount is equal to quantity extracted by the US and China put together. Fundamentally, water should be managed at the community level and the government should empower communities in water management by improving their knowledge in areas like what is groundwater, how much rainwater percolates annually and water recharge pits. Based on this, they will be able to take informed decisions on water usage,” Shekhar said.

Several parts of India have witnessed drought in recent years. According to the Union Ministry of Agriculture, parts of Maharashtra, Karnataka, Andhra Pradesh, Jharkhand, Gujarat and Rajasthan faced a severe drought in 2018. A majority of these states reported crimes and murders, the NCRB said.  The Composite Water Management Index report released by the Niti Aayog in 2018 brought out another aspect of the water crisis: the alarming fall in groundwater. The report said 21 major cities, including Delhi, Bengaluru, Chennai and Hyderabad, were heading towards reach zero groundwater levels by 2020, affecting access for 100 million people.

The CWMI report also stated that by 2030, the country’s water demand was projected to be twice the available supply, implying severe water scarcity for hundreds of millions of people and an eventual six per cent loss in the country’s GDP.

Stay up to date on all the latest The Sunday Standard news with The New Indian Express App. Download now
(Get the news that matters from New Indian Express on WhatsApp. Click this link and hit 'Click to Subscribe'. Follow the instructions after that.)
TAGS
National Crime Records Bureau drought water crisis