CAA stir: From Shaheen Bagh to Bhopal, sounds like Satyagraha across India

For many, it is a trial of oneself in the court of self-conscience; to others, the road to re-discovery of self’s patience, doggedness and hope.

The mood is electric despite it being days and endless nights on the streets for these women in several towns across India — all joining protests against the Citizenship Amendment Act (CAA).

In doing so, they have spawned dozens of ‘Shaheen Baghs’ of Delhi, which has come to mean a symbolic resistance to save, what they believe, is the concept of an all-inclusive multi-faceted country. The hours have lingered but the enthusiasm is high.

A furtive glance, a stolen smile and a shout, rising to the crescendo as a thousand throats latch on- keeps the warmth going in the chill and the sleeplessness is lost.

For many, it is a trial of oneself in the court of self-conscience; to others, the road to re-discovery of self’s patience, doggedness and hope — even as each soul-lonely otherwise in the crowd — is also forced to reflect on the mundane and the dreary in their lives, betwixt the slogans that pepper the ears.

PRAYAGRAJ: The wane and the wax crowd swells and wanes between dawns as the women rush back home in the mornings to attend to daily chores, send kids to school and cook meals for their families.

But by 3 pm, the swagger is back as is the ‘crowd’, swelling again to keep time till the next dawn at the sprawling Mansoor Ali Khan Park in Prayagraj (Allahabad) Central.

“If women in Delhi can protest in freezing cold, why can’t we?” asks Sameena holding her five-year-old in arms as Rashida quips, “We will not budge this law is off our back.”

Rubina of Roshanbagh says her protest is “not against any party, or government” but against the attempt to malign the secular fabric of India.

Yusra says she had left her two kids back home with her husband as she feels it is time to speak.

“We also deserve respect. We will not show any document. Why should there be detention centres for people who have lived centuries in this country? We lose our sleepover such questions which no one wishes to answer,” she says.

Asifa is more direct: “How long do we have to prove our loyalty to our nation? We were born here in Hindustan,” she says and then shouts, “Bharat Mata ki Jai”.

GAYA: With bonfire and hot tea

‘Shanti Bagh’ in Gaya has come alive with hundreds of women, college and university-going girls of all castes and age-groups joining the dharna since December 29 under the ‘Samvidhan Bachao Morcha’(Save Constitution Front).

With plastic chairs, blankets, bonfires, stoves for tea and water kiosks; quotes of Dr B R Ambedkar and Mahatma Gandhi pasted all around, they too are challenging the CAA and the NRC.

Akhilesh Kumar, a local grocery owner, sells water bottles and biscuits at subsidised rates to those who come to participate in it.

“They are doing a good job in saving the country from another division through issues like CAA and NRC. I try to help as I can,” he says.

Safi Ahmad, a social activist in Gaya says that the ongoing protests have been so unprecedented that those of the Muslim community who never dared to venture out on the streets have shed their inhibitions and are joining the protest in large numbers.

“It is visible everywhere.”

The volunteers here are mindful of giving safe passage to ambulances, school buses and switch off the public address system during school hours and after 10 pm at night, says Maryam Farhad. 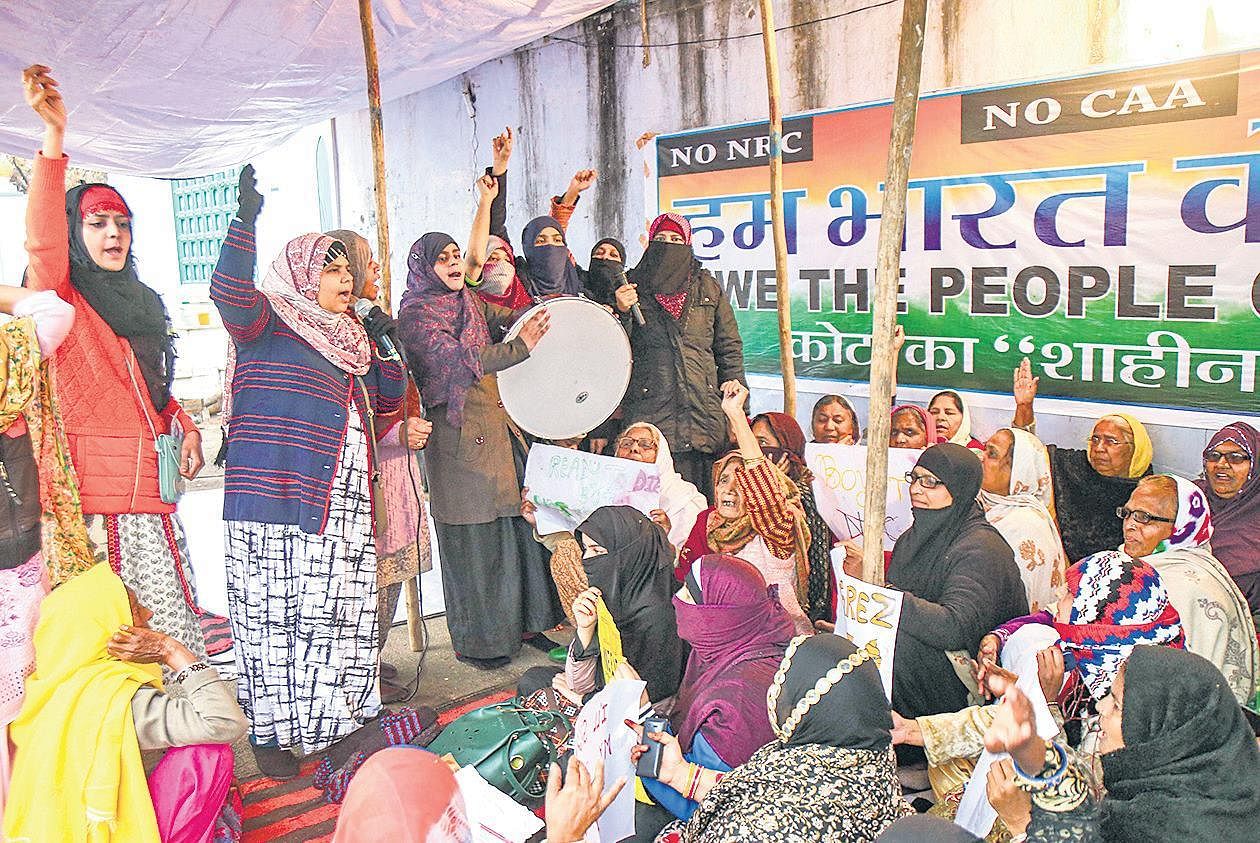 In Kolkata’s Park Circus, protesters, irrespective of community, chant to the strains of Raghupati Raghav Raja Ram, Patita Pavan Sitaram…..Ishwar Allah Tero Nam, Sabko Sanmati De Bhagawan, the bhajan sung by Mahatma Gandhi. The demonstration which started on January 7, has become a destination for young students, social activists and artistes, drawing attention of Kannan Gopinathan, the IAS officer who resigned in August to protest clampdown in Kashmir, and Umar Khalid who addressed them.

Tabasum Siddiqui, a homemaker from Bright Street says, “The BJP is using Lord Ram’s name to divide us, but to us, he is the epitome of harmony. There is no difference between Ishwar and Allah.”

Singing Gandhi’s song was the brainchild of Mousumi Bhowmick, a Bengali singer. “We were discussing how to deliver a message on communal harmony and this particular piece was the best,” says Bhowmick.

Residents of the locality extend help to the protesters, allowing the women to use their washrooms and toilets, offering them steaming tea and snacks to beat the cold.

The Maidan, where the demonstration had started with a group of 70 odd Muslim women, mostly homemakers, on January 7, has become a destination for the young college students, social activists, intellectuals, professionals and artistes.

In Kondhwa of Pune, Zakia Khan, a collegian has been missing her lectures over the last week, just to be at the protests which started with 100 women and has swelled to 500 daily at Konark Indrayu Mall.

Organised by Qul Jamaat-e-Tanzeem, protesters say that unless the “unconstitutional” CAA and other Acts are not revoked, this protest will continue.

“We want to show that women can also come together and protest for their right. We are thankful to Dr BR Ambedkar for including the right to protest in the Constitution,” Zakia says.

“There are 90-year-olds to two-month-old children at the site witness to a string of awareness plays, songs, speeches and slogans,” says Liaquat Khan. The protest started with 100 women while in seven days, the number has swelled to 500 at Konark Indrayu Mall in Kondhwa. Shaheen Bagh of New Delhi is the inspiration for these Pune women. Recalls Zakia,

“We had floods recently in Pune and the waters entered the poorest homes, taking away everything. Now, would it be fair, that for the lack of ration card in such circumstances, the government stops food, or, if school books are gone, the school closes the door? There are many who lost their Aadhaar card, crucial documents like PAN, land records. Why are we illegal citizens?” she asks.

Another protester Meraz Sheikh dittos. Liaquat Khan believes he is fighting not only for Muslims but for all. Others to face the dilemma. “Is a chit of paper more valuable than life?”

In Raipur, people say they have never ever witnessed such sustained protest for any cause or issue. The hundreds who congregate around the area of Jai Sthambh Chowk say they are not only disapproving of CAA, but also lending solidarity to protests across India.

“Shaheen Bagh is our inspiration to protest — not as a ritual, but a matter of conviction,” says Vikram Singhal.

The large women’s presence has added enthusiasm and strength to the spontaneous gathering, with the children singing patriotic songs at the chowk in the heart of the city.

“Interestingly there are no organisers or officer bearers who organise the event. It’s a peaceful people’s campaign where everyone is welcome. They are self-motivated,” says veteran journalist Lalit Surjan.

“We will not budge till the Central government rethinks and takes back its decision on CAA and NRC,” says Sanket Thakur, a senior scientist.

The people in the state capital are planning a mammoth gathering to protest the entire night of January 25 and return home only after hosting the national flag on January 26. Anti-CAA and NRC protests have turned into a mammoth Satyagrah at the historic Allama Iqbal Maidan since January 1.

The venue seems to have been carefully chosen, surrounded as it is by a chain of heritage buildings which showcase a blend of cultures.

The Indo-Islamic and Indo-French architecture, including the Sheesh Mahal and Shaukat Mahal, stand out.

Two of the heritage sites are linked to Iqbal, who stayed there, penning his famous nazms.

The protests are laced with women’s poetry and Mushaira to pep up spirits.

“Not only youngsters from Bhopal and other places, but even youngsters from Bihar joined us on January 7 at the Satyagraha. Our posters and pamphlets are funded by donations from visitors, but it’s commoners of Bhopal who have provided the tent and pillows,” said Haq.

“The most amazing aspect of the Satyagraha till now has been our ignorance about who provides the protesters tea and food, besides wood to keep warm in chilly winters. Whenever we have tried to find out who is/are providing them, we only got one answer — the spirit of Bhopal,” says Vijay Kumar.