‘A good sentence or turn of phrase can make one feel pure happiness’: Author Siddhartha Sarma

His recent non-fiction title was Carpenters and Kings: Western Christianity and the Idea of India (Penguin Hamish Hamilton India, 2019).

Siddhartha Sarma is an award-winning author of fiction and nonfiction, a journalist and historian.

His recent non-fiction title was Carpenters and Kings: Western Christianity and the Idea of India (Penguin Hamish Hamilton India, 2019).

His upcoming novel, Twilight in a Knotted World (Simon & Schuster India), will be out end-August. Earlier based in Delhi, Sarma now lives in Canada.

What is your writing schedule?

It depends on my work hours. I have mostly worked in newspapers, so I would get free after midnight. I prefer writing between midnight and dawn, so that is a happy coincidence.

It is a bit of a sprint over a few months, followed by long periods of inactivity, an approach which I am trying to correct. 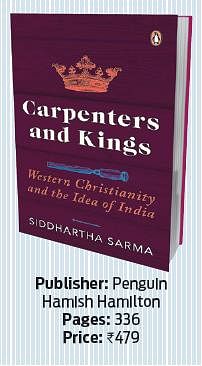 Does writing energise or exhaust you?

A good sentence or turn of phrase can make one feel pure happiness. The process of writing, with the characters finding life and the plot coming together, makes me feel alive in a way that no other experience has been able to.

The attendant tasks of editing and pruning are physically exhausting in a few ways, but it is a welcome form of exhaustion.

Writing advice you’d like to give your younger self?

Be more productive. Read more, and more selectively. Do not be frightened when the brain begins to decay and memory becomes unreliable. It is a part of the process of living.

Make your peace with it, but be mindful of time passing by.

What are your favourite books?

Too many to mention, or perhaps too few. From fiction writersalive and better-known - Oscar and Lucinda, Tinker Tailor Soldier Spy, Gilead, The Time of the Hero, The Dogs of Riga, Life & Times of Michael K. And now I am going to agonise over why I did not mention the others.

To be considered a good writer by a good reader. A small measure of literary success does help sell a few copies, if not as many as a genuine bestseller, but the converse is never true.

So, the first one is preferred.

Favourite spot/s in Delhi you used to write at?

I have written in cabs, with mixed results. I have sometimes gone to work early and written till the workday began. Workplaces give a kind of clarity and a sense of urgency to the mind. But I mostly prefer writing at home, in any quiet corner available.