Through her music video AsaN, Nayak is raising funds for GOONJ, an organisation working relentlessly to provide relief for those struggling for essentials in the ongoing pandemic.

Born in Lucknow (Uttar Pradesh), Sufi singer Radhika Sood Nayak did her schooling from Ludhiana (Punjab) and then moved to Delhi to pursue an undergraduate degree in economics at Shri Ram College of Commerce.

Post that, she completed an MBA from XLRI Jamshedpur, and was firmly ensconsed in the corporate sector when the shift happened. And she turned into a Sufi singer.

Through her music video AsaN, (available to view at www.radhikasoodnayak. com/asan) Nayak is raising funds for GOONJ, an organisation working relentlessly to provide relief for those struggling for essentials in the ongoing pandemic.

As your family is not musically inclined, how supportive were they of your career choice?

Ours was a typical middle-class family where children were encouraged to pursue academics, performing arts was, at best, a hobby.

My parents, though far removed from the performing arts, always encouraged me to learn.

The real resistance was from my end. Because of my intense shyness, I always felt ‘burdened’ whenever asked to perform.

An MBA working in corporate sector, you gave it all up to pursue your passion.

I was working with ANZ Grindlays when it went through a restructuring, and I went through the churn as well. A voice within told me to pursue music.

I quit my job amidst some resistance from my family. They were concerned if I could live without an MNC salary and corporate lifestyle, and whether I would be able to handle the social pressure of not doing anything ‘substantial’ as perceived by the world!

But I was very clear in my mind, and started learning Hindustani Classical music. Later, I gave some public performances and also became a graded artist with Akashvani.

Sufi music happened in 2015 when I did a musical narrative on Baba Bulleh Shah ji at the Kabir Festival.

Sufi poetry grips me. There is a world of wisdom, abandon, surrender, of what really counts, which resides in Sufi kalaam.

See how effortlessly Bulleh Shah combines the Hindu festival of Holi and the Muslim holy chant Bismillah in Hori kheloongi keh Bismillah. I am totally smitten by it. 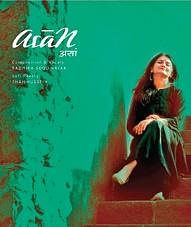 How did AsaN happen?

In 2017, I began working with dastango Ankit Chadha on Sufi faqeer Shah Hussain. AsaN (meaning us) was my first composition.

But in May 2018, Chadha met with a fatal accident and passed away. Then, in December 2018, I got in touch with my Kabir Festival co-artiste Sanjukta Wagh, and we did a musicdance exploration Faqeer Nimaana (based on Shah Hussain poetry). AsaN was reborn.

How you are reaching out to your fans in this COVID pandemic?
Live online sessions have been a lifesaver! I did my first live concert for CRED members.

It was a ticketed event. Post that, I did a Lockdown Concert for my XLRI Alumni group. Several others followed, including the one for GOONJ Volunteers. I have dedicated AsaN to the Rahat COVID campaign of GOONJ. It is my offering to the GOONJ volunteers who are serving with so much passion. All those reading this piece, please contribu teatzip click/asanforgoonj

AsaN, an evocative kalaam of the 16th century Sufi mystic Shah Hussein. Composed and sung by Nayak in collaboration with GOONJ, the song aims to raise funds for migrant labourers and daily wage earners during COVID-19.

Originally, AsaN was composed in 2017 with dastangoi Ankit Chadha for a musical narrative on Shah Hussain. However, Chadha’s untimely death in May 2018.

The music video can be viewed on www. radhikasoodnayak. com/asan To contribute to Rahat COVID, click zip.click/asanforgoonj

Now we are on Telegram too. Follow us for updates
TAGS
Radhika Sood Nayak Sufi music COVID 19 Goonj