Another point to notice is that the number of challans issued after the law was enforced has gone up.

NEW DELHI:  The enforcement of the new Motor Vehicles Act seems to be working as the number of accidents in 12 states has seen a decline since its enforcement on September 1 last year. Officials say more states, which are yet to report their data, will show a lesser number of accidents. “Transport is a state subject and we are still awaiting details from remaining states. We are confident that the data from these states will also show a decline in the number of road accidents,” a ministry official said. Notably, Transport Minister Nitin Gadkari had said the new rules were being enforced not with to generate revenue but to ensure that safety measures are adopted by commuters. 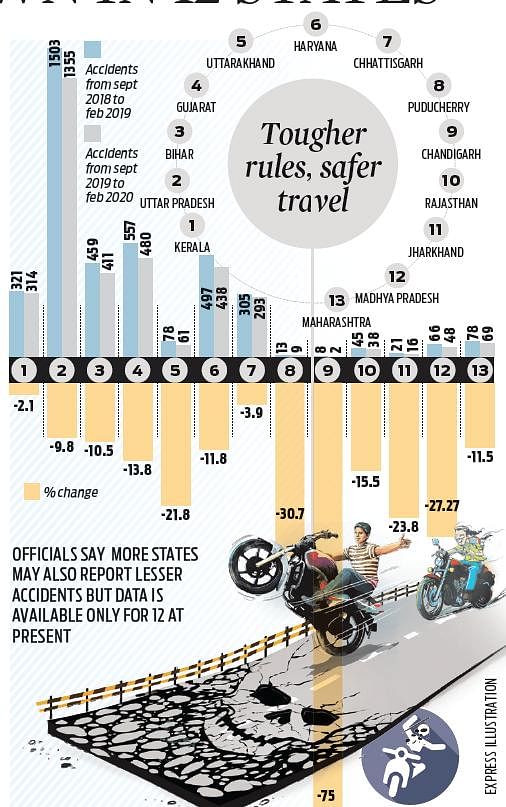 “During the period last year, challans worth Rs467 crore were issued. This is an evidence that the new MV Act is working. Also, with the increased number of challans, we can see that accidents have declined,” the official said.

Experts, however, called for caution. “The decline in number of accidents is a good sign but then it could also be due to non-reportage of accidents. We have see at the ground level if really the number of accidents have reduced. However, it is very difficult to assess the reality on the ground given the vastness of the country,” a researcher at the Central Road Research Institute (CRRI) said.

Saurabh Sonawane, a road safety and crash cause testing expert was also of a similar view. “It is good. But apart from making and implementing rules, the design and technical defects on the roads and highways must be rectified. Once that is done, we will see a drastic fall in the number of accidents,” he said.

Now we are on Telegram too. Follow us for updates
TAGS
Motor Vehicles Act road accident