Off the beaten path and into gainful stride

The Class XII educated youth knew there would be no job security even if he were to graduate with a pass course.

Mahendra Jana had found it easier to drive a pick-up van than pursuing a two-year graduation course in a college in Midnapore, 17 km from his hometown.

The Class XII educated youth knew there would be no job security even if he were to graduate with a pass course.

Handling the steering of his vehicle was a more effective way to feed his parents, brother and sister.

But when his brother Swapan passed the higher secondary examination in 2016, Mahendra had a rethink: could he do something more worthwhile for a more secure future?

He had a choice this time-a newly set up Industrial Training Institute (ITI) unit at Jhargram, 12 km from his home in Dherua village.

“I never wanted to see my brother behind the wheels like me. Today, my hard work has succeeded,” he said.

Swapan joined the ITI, passed out and secured a job as an assistant electrician in a factory at Kharagpur in West Midnapore district.

After the change of guard in the state, Bengal government adopted an integrated skill development policy and set up 262 ITIs and 39 polytechnic colleges. 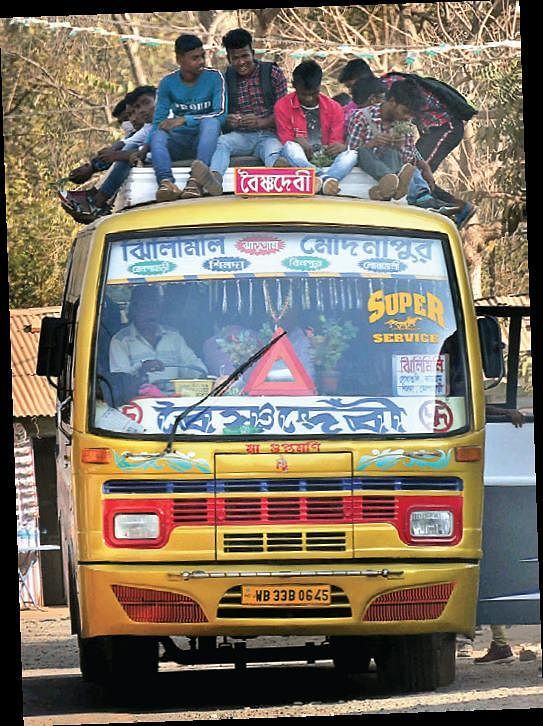 Weaning off youth
Samaresh Singh, the principal of Jhargram ITI, said the institute provides 240 seats. “Students from distant places come here…Each year, over 50% of total students have secured placements in campus interviews,’’ he said.The newly set up institute at Sahari near Shilda helped wean back many students who decided to opt out of higher education after passing Class X or Class XII exams and is today training more than 300 students in each session.

Two siblings of Subhash Mahato too worked as a helper of a truck driver. “I passed higher secondary from the local high school in 2016 and had a plan to join my brothers’ profession. It was a forced choice since the nearest college was 18 km away from my village and the public transport facility is not good. When I heard about the training institute, I enrolled myself and set up a new motorcycle repairing garage with the help of my brothers,’’ said Mahato. The Mahato brothers now earn Rs 25,000 every month.

Forced migration
Souvik De, the teacher-in-charge of the newly set up ITI, said the institute has helped many to take up newer professions. Even homemakers have been enrolling to learn a trade to supplement household incomes and their attempts have been successful.“Many women approached us for sewing training. We arranged special sessions for them and now more than 50 women are taking training,’’ said De.

No more a labourer
“I used to work as agricultural labourer on others’ land during monsoon. From the institute, I took sewing training and with the help of the government’s financial assistance, I purchased four sewing machines and set up a tailoring unit. Now our five-member family is living a comfortably,’’ said Dasarath Singh of Chakadoba.

Not many months ago, the Bengal government signed an MoU with Maruti Suzuki for an advanced course in automobile repairing at ITI Tollygunge unit. Another MoU was signed with Samsung for training at ITI institutes in Kolkata, Kalyani, Howrah and Burdwan. Of the 426 candidates trained, 265 landed jobs with Samsung.

Stay up to date on all the latest The Sunday Standard news with The New Indian Express App. Download now
(Get the news that matters from New Indian Express on WhatsApp. Click this link and hit 'Click to Subscribe'. Follow the instructions after that.)
TAGS
West Bengal