‘Read as much as you can’

His first collection of poems, New Delhi Love Songs, was published in 2017 by Speaking Tiger Books with the support of the Jehangir Sabavala Foundation.

His first collection of poems, New Delhi Love Songs, was published in 2017 by Speaking Tiger Books with the support of the Jehangir Sabavala Foundation. 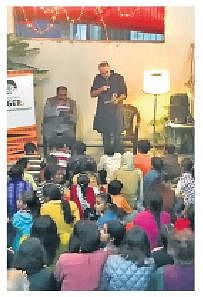 Two or three months out of the year, I write a poem a day. I may do this with a few other poets, but other than them, I don’t tell anyone.

I don’t want friends or colleagues thinking I’m distracted by poetry, though often they would be right if they thought that.

During these times, I’m always looking out for poems; I mine my dreams and the images I encounter on my daily commute. Everywhere I look, I ask, ‘Is that a poem?’

At other times of the year, my writing schedule is sporadic. During those times, if a poem doesn’t walk up to me and tap me on the shoulder, I likely miss it.

Does writing energise or exhaust you?

It’s tiring of course, like any craft. But when it works, it feels pretty good.

Writing advice you’d like to give your younger self?

Read as much as you can. Read what you like, but also read things that are difficult and confusing. Try to live an interesting life. There are things that matter more than songs or poems.

There are too many to name. A few books I go back to often: Kolatkar’s Jejuri, Shrikant Verma’s Magadh, and Wild Girls and Wicked Women, which includes poems by Malathi Maithri, Salma, Kutti Revathi and Sukirtharani. Also Mangalesh Dabral’s This Number Does Not Exist.

Just about anywhere in the world, if a book of poetry in English sells 500 copies, it’s a success; it would be foolish for any poet to expect to make a good living off of sales. For me, if a poem finds a few sympathetic readers and makes them think, then that poem is successful.

Favourite spot/s in Delhi you write at?

In normal times, the Yellow line of the Delhi Metro Rail Corporation, if I get a seat, only because it so rarely happens. Aside from that, anywhere will do. Of course, these days, like everyone I’m doing my best to practice social distancing. So home is the best place to write.

Stay up to date on all the latest The Sunday Standard news with The New Indian Express App. Download now
(Get the news that matters from New Indian Express on WhatsApp. Click this link and hit 'Click to Subscribe'. Follow the instructions after that.)
TAGS
Michael Creighton