Of quality masks and ration this coronavirus pandemic

Concerned over the safety of soldiers posted at borders, Sparsh Ganga Abhiyan has donated 10,000 reusable masks made from khadi to the staff at the Armed Force Clinic in Delhi.

NEW DELHI: Concerned over the safety of soldiers posted at borders, Sparsh Ganga Abhiyan has donated 10,000 reusable masks made from khadi to the staff at the Armed Force Clinic in Delhi. These masks will also be distributed to the doctors and soldiers at the clinic, apart from soldiers posted at India’s borders. Sparsh Ganga Abhiyan has been working towards rejuvenating the Ganga since 2008, and around 5.5 lakh people the world are connected with this movement. 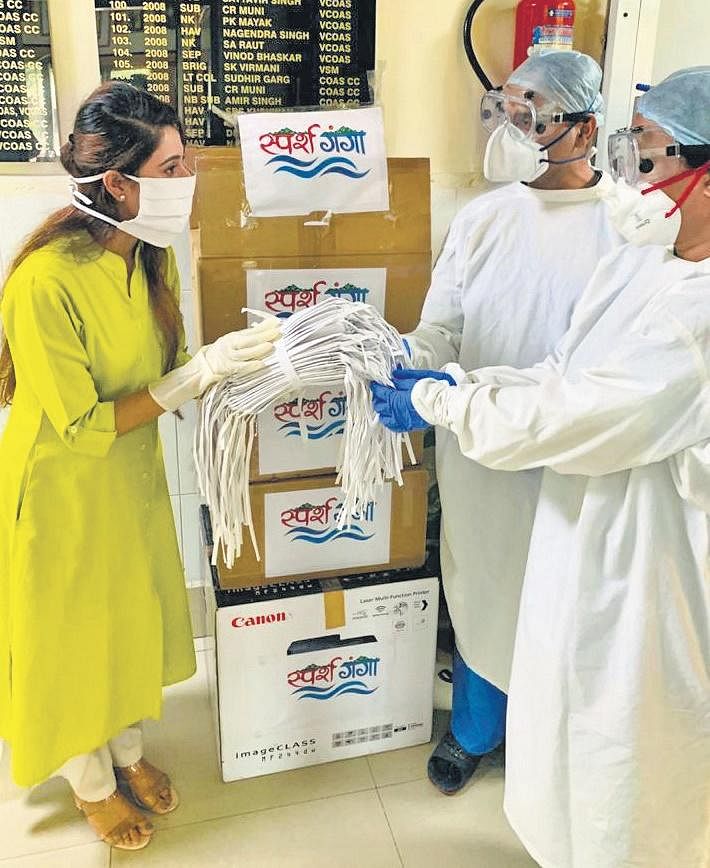 “We are all fighting this global epidemic sitting at our homes following the lock down. But our brave soldiers on the borders are fighting twin battles – enemies from across the border, and tackling this deadly virus. It falls upon all of us to protect and save our soldiers,” says social activist Arushi Nishank, an active promoter of Sparsh Ganga Abhiyan. The masks were made by Sparsh Ganga Abhiyan under its programme Raksha Sutra Se Pahle, Raksha Kavach in collaboration with AquaKraft as a sustainable initiative to help in monitoring and improving the environment and enhancing the economy.

“The Sparsh Ganga Abhiyan members all over India decided to send their ‘brothers’ a face shield. Raksha Bandhan is a prominent festival in our country in which sisters tie a thread of defence on her brother’s wrist and brother always vows to protect her sister. Then it is also the duty of the sisters that they should protect the wrist which is always there to protect them,” adds Nishank.

Hamdard National Foundation (India), known as HNF, has joined in relief efforts to help those most in need during the pandemic. With its initiative called ‘Ration Distribution Drive’, HNF was successful in reaching out to more than 1,200 underprivileged families, whose livelihoods have come to a standstill. To implement the food relief measures, HNF collaborated with Sofia and Guncha Foundation – NGOs that have actively extended help to underprivileged families in the National Capital Region.

Hammad Ahmed, President, Hamdard National Foundation (India) said, “Hamdard is working day in and day out, with partner NGOs and the government machinery to get as much food relief material to the underprivileged families, who have lost their livelihoods, in this inevitable lockdown during the coronavirus pandemic.” HNF, with the help of the District Magistrate (South East) Delhi office, distributed food ration kits to over 300 families based on emergency distressed calls received by the authorities. This was in collaboration with the NGO MARHAM, that ration kits were prepared inside Anglo Arabic Senior Secondary School, at Ajmeri Gate in Delhi, for the distribution drive.

It also donated monthly supplies for 400 families to the Ministry of Food and Civil Supplies, Govt. of NCT of Delhi. HNF distributed rations to feed 200 families through NGO Sofia. Dry food ration kits were donated to Guncha Foundation to distribute it amongst the most vulnerable sections of society. Helping Hands, an initiative by teaching and nonteaching staff of Jamia Hamdard University, also collaborated with HNF in its good works.

Stay up to date on all the latest The Sunday Standard news with The New Indian Express App. Download now
TAGS
Sparsh Ganga Abhiyan coronavirus COVID 19