Raunak Kapoor, 30, has always loved his work as a software engineer at one of the country’s largest IT companies, where he begun his career at six years ago.

Raunak Kapoor, 30, has always loved his work as a software engineer at one of the country’s largest IT companies, where he begun his career at six years ago. What he didn’t love was the commute. “I used to live in West Delhi and then later moved to Gurugram a couple of years ago, making my commute to work in Noida all the longer. 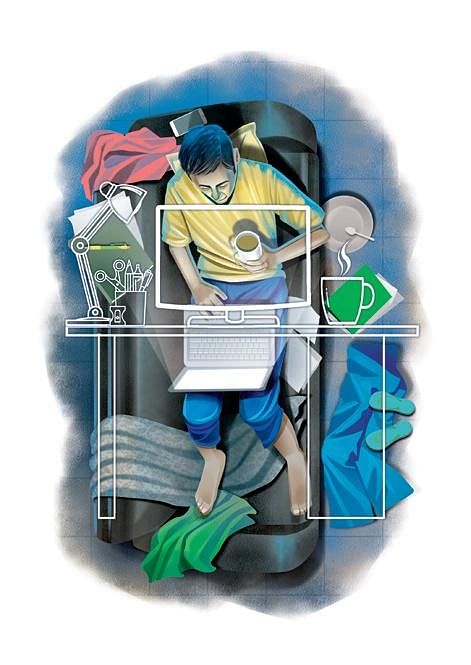 Before the pandemic and lockdown, I had seriously considered looking for a job closer to home because just the commute would easily add three-four hours to my work day.” After work from home (WFH) became the norm during the lockdown, it gave Kapoor and others like him a much-needed reprieve from the hassle of long commutes, finding parking if coming by car and a host of other issues. But there was a concern that WFH would only be temporary.

So when the government announced earlier this week that the telecom department had removed registration requirements to carry out work beyond traditional office complexes in tech and IT businesses – something the industry has been requesting for quite a while now – it was a move welcomed across the board.

“We have been 100 percent WFH since March 14, and as has been noted by several of our other industry peers as well, WFH has increased our overall productivity five-fold as people prefer keeping things flexible, which means they are free to choose a time when to spend time with family and when to work on of f ice assignments.” With the explosion of video-calling apps and professional tools available on all platforms and increasing data speeds, WFH has never been easier for employers as well as employees.

Pulkit Sharma, CEO & Co-Founder, Khabri, a popular digital audio platform says his company has seen a 30 percent increase in productivity and an overall improvement of efficiency on all fronts since they adopted WFH. “We have adopted multiple tools to ensure real-time collaboration and flow of information, which ensured seamless communication and enhanced our productivity. As our employees are saving on travel time and are able to devote those extra hours towards their family and personal well-being, the downtime helps them to be more productive in working hours.

We also gave up our Co-Working space and will only continue with WFH in the future.” WFH has also enabled employees who had to change cities for work to now have the chance to return home. As Rai points out, “Most of the employees in the IT sector are not from metros; they might be living in NCR, Bengaluru, Hyderabad, etc, for work but they still find themselves connected to their respective towns or villages. This new working style has removed the barrier where people were struggling in between their ambitions and social lives as anyone can work from any place."

Kapoor said that while it was difficult to initially properly balance work and home life in the sense of carving out what would be office hours and when he could concentrate on family and household chores, he’s now become accustomed (“you could say spoiled”) to this new system. And while it may be a paradigm shift for the Indian business ecosystem, people’s reaction and their professional output seems to ensure it’s going to work out, literally.

Now we are on Telegram too. Follow us for updates
TAGS
IT professionals Work From Home