My son is in Army and we're being called Khalistani terrorists, says 72-year-old farmer protesting at Burari

'If the government does not repeal the law and fulfill our demands, our wives, children, and even my grandchildren will come on the roads to support us,' the man said.

NEW DELHI:  Among the hundreds of farmers at the Nirankari ground in Burari is Bhim Singh, 72. His son is in the army and deployed in the borders. So other than the new farm laws that have angered him, it is the insinuation by government circles that Khalistani elements are fanning the farmers’ agitation that has got his goat.

“My son is protecting the country at the border and his father is being treated like a terrorist and a criminal for raising his voice,” said Bhim Singh, who reached the national capital after negotiating through multiple police barricades, tear gas shells and water cannons. 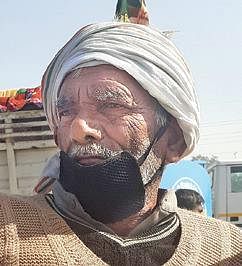 “Not only my son, my nephews are also in the army serving the nation but their family is starving and sinking in debt due to the three anti-agriculture laws imposed by the Central Government,” said Bhim Singh, a native of Bijnor, Uttar Pradesh.

His family farms sugar cane, wheat and barley. But, for the last 14 months, he claimed they have not been able to sell any crop or sugar cane because of the “corporate farm bill.” The government has already removed many items from the essential commodities, he said.

Sharing his hardship, Singh said: “We are four siblings and everyone has sent one child to serve in the army for the nation. While we produce food, cereals, wheat, sugar, pulses for the country, today we have been locked here at this open ground like a criminal and are being called terrorists by the government.”

Singh said if the government “does not repeal the law and fulfill our demands, our wives, children and even my grandchildren will come on the roads to support us.”

“The government will see roadblocks back at home in UP. We don't have any intention to disturb the public but it’s high time that the country and its citizen know what the government is doing to the farmers who give you food to survive,” he said.

“We are not asking for your fake promises of Rs 15 lakh in our account. The farmers have always worked hard for their family and this country. We are asking just to add an amendment or a line in the newly introduced farm laws that the MSP will continue,” Singh said. The farmer said they were so much in debt that their children were unable to get online education.

The farmers dismissed allegations that Khalistanis support them, saying every family has sent one child to serve in Army.

Now we are on Telegram too. Follow us for updates
TAGS
farmers protest Farm Laws Burari