New study suggests poor quality of water and sanitation could have made Indians more immune to the disease.

NEW DELHI:  Countries with poor hygiene, sanitation and quality of water appear to have a lower Covid-19 case fatality rate as compared to rich countries with better hygienic conditions, a study has found.

The latest analysis by researchers in India has added to the growing body of evidence in support of the “hygiene hypothesis,” which argues that areas or countries with high levels of background infections are likely to experience fewer Covid deaths. 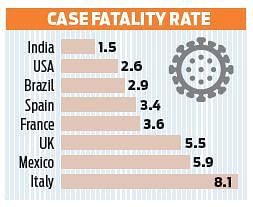 Till Friday morning, India had registered 1,17,306 deaths even though the total Covid-19 caseload in the country was 77,61,312, which means the country has a case fatality ratio of 1.5%, among the lowest globally.

Within the country, Bihar, which lags behind most states on socio-economic development parameters, managed to keep the death rate at 0.5%, or one third the national average.

Bihar is not alone with a low CFR. Kerala and Assam with a rate of 0.4, Telangana 0.5, and Jharkhand and Chhattisgarh at 0.9 have CFR less than one. But Maharashtra, Gujarat and Punjab, which are more developed, have CFR values of 2 or higher. The paper has been published by the CSIR, National Centre for Cell Science in Pune and the Chennai Mathematical Institute.

The researchers have analysed various developmental parameters, including measures of water and sanitation, and Covid-19 deaths per million in over 100 countries and has found that the poorer the water-sanitation scores, the lower the deaths per million.

“Paradoxically, better sanitation leads to poorer ‘immune training’ and thus could be leading to higher deaths per million,” the paper said.

Several immunological studies in the past have suggested that exposure to bacterial or parasitic infections can strengthen the immune system against any future infections. Parveen Kumar, an epidemiologist with the Rajendra Prasad Government Medical College in Kangra and an author of a similar paper, ‘Covid-19 mortality: Probable role of microbiome to explain mortality’ too suggested the same. 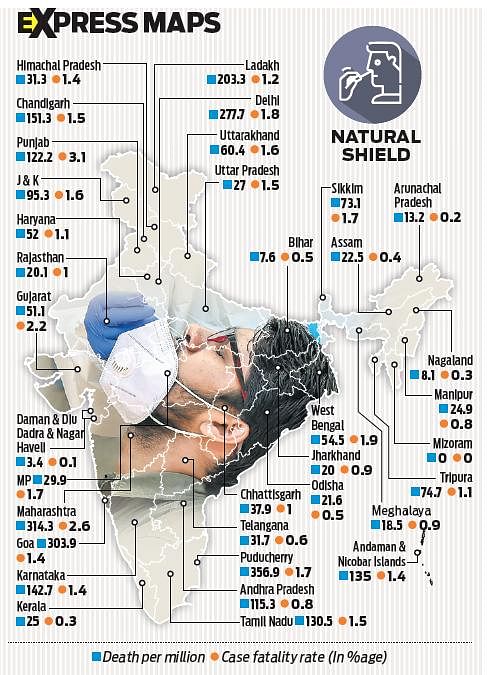 “We did find that deaths are low in areas with poorer sanitation and it could be due to a process called immune training, which involves multiple arms of the immune system and is still not very well understood,” he told this newspaper.

Immunologist Dipyaman Ganguly said there was greater focus on the concept of trained immunity which, to some extent, is related to the broader concept of hygiene hypothesis.

“There is data that with increased exposure to germs in the environment, especially usual in the tropical climatic conditions, prepare our immune system better in terms of its repertoire and regulations.”

Senior biologist and Jamia Hamdard vice-chancellor Seyed Hasnain said while he cannot vouch for the link between trained immunity, hygiene hypothesis and low death rate due to Covid-19, it was very likely.

“There is a possibility of strong correlation between exposure to number of pathogens and also probably BCG vaccine to how our bodies react to a new virus such as SARS CoV 2.”