In desert’s nothingness, this Rajasthani teacher writes lessons of life

Despite facing tough social norms, Barmer’s Geeta Solanki studied hard to become a teacher. Awarded this Teachers’ Day, she set up her school where half of the students are girls

RAJASTHAN: Until some years ago, in the village of Geeta Solanki in Barmer, the desert zone of Rajasthan, girls were not expected to study beyond 8th standard. In Kawas village, about 30 km from Barmer city, things were made very clear for Geeta: she would get married after school. Each time Geeeta wished her teacher-father, she’d imagine herself in his position. She should study further, but how? The question lingered on, even as she got married. 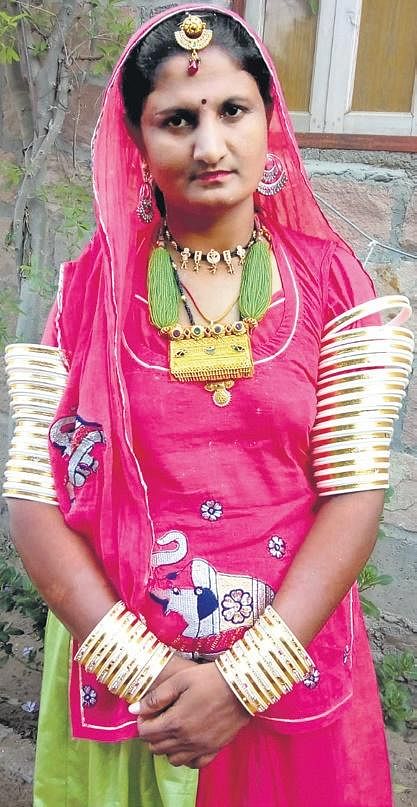 It all flashed through her mind as she got up to receive the Teachers’ Day award from President Kovind a week ago. “I invited a lot of snide remarks when I tried to study further. My husband, a matriculate, stood by me,” recalls Geeta, who belongs to an OBC community. Bound by social norms, she had to do all the house chores and study in secret.

“From cooking and cleaning to walking miles for getting drinking water, to grazing the cattle — I did all the work that my in-laws expected me to do. Since I had to study in secret, I would spare some time and go to our farmland to study,” says Geeta. In 2004, she passed the 10th exams and got a job under the Shiksha Karmi scheme of the Rajasthan government – at a time when she was expecting her first child.

Then she completed her Senior Teaching Certificate degree, and was made a permanent teacher to educate children of her area. That was the bold new beginning. Initially, she taught children under the shade of trees. In her village in the first year itself, she had 55 students in her school. Finally, Geeta gathered courage to ask her father-in-law to provide her some land to set up a school.

By then, Geeta earned a monthly salary of Rs 1,200, and she gave her three-month wages to her father-in-law. In return, he agreed to give her 3-bigha land which the family owned to set up her school. In 2006, when Barmer suffered freak floods and Kawas was one of the worst-affected villages, Geeta faced her toughest challenge. “At least 15 of my students died in those floods and we all were devastated. Though my school remained flooded for more than a year, I started teaching my students in some Army tents gifted to our village,” she recalls.

“Since we had no books, I used to collect the wrappers of Parle-G biscuit packets to help my students learn the alphabets. The Unicef then stepped in to help us with books,” says Geeta. Today, her school — the Rajkiya Shikshakarmi Prathmik Vidyalaya – is a living monument to her efforts, perseverance and courage. Since 2015, about 80 students have taken admission every year and nearly half of them are girls.
Geeta has won the national award for ‘Innovation in Education’. She had to face three interviews in three different cities before she was finally chosen for the award.

“In government schools, we hardly have any funds for creative activities. To overcome this, I keep telling my students that ‘waste is best’. I encourage students to use the waste all around. We train them to create something useful out of waste material. Once they create something, students also learn to value and care for those things,” says Geeta. Geeta now earns a monthly salary of Rs 52,000, but her larger struggle continues. Since 2012, she has been demanding a road for her school, but has been unable to get one. Her greatest consolation is that she is not alone.

More from The Sunday Standard.
Now we are on Telegram too. Follow us for updates
TAGS
Barmer Rajasthan Geeta Solanki Rajkiya Shikshakarmi Prathmik Vidyalaya