No comparative study has been conducted by the Airport Authority of India (AAI) to show that the PPP model would be more beneficial for the growth of the aviation industry in India.

NEW DELHI:   No comparative study has been conducted by the Airport Authority of India (AAI) to show that the PPP model would be more beneficial for the growth of the aviation industry in India. The fact gains significance as AAI Board had, in its meeting on September 5, 2019, approved leasing of six more airport s — Bhubaneswar, Varanasi, Amritsar, Raipur, Indore and Trichy — for undertaking operations, management and development through PPP model.

A parliamentary panel also analysed the share of AAI in the gross revenue earned by DIAL and MIAL, which run two busiest airports — Delhi and Mumbai. It noted a declining trend in the case of DIAL and demanded to know the reasons. The panel also noted the huge amount to be spent by the government on the airports approved for privatisation. 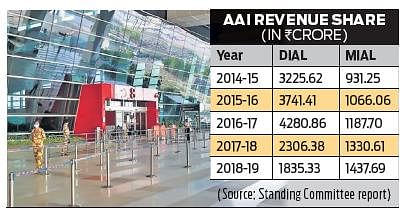 It sought to know from the government the arrangement between the private operators and AAI under PPP model where the AAI has to spend Rs 7,291 crore on these airports though the responsibility to Design, Build, Finance, Operate and Transfer is that of the private operators/promoters. In response to the panel’s query on whether any comparative study was carried out by any independent agency on the functioning and performance of AAI managed vis-à-vis private airports, the AAI said no comparative study was conducted to show that PPP model would be more beneficial for the growth of aviation industry.

It, however, added that DIAL and MIAL had brought improvements at airport infrastructure which “transformed the passenger experience, improved efficiency and capacity for airline operators and delivered revenues” to the AAI. The revenue share of AAI in the gross revenue earned by DIAL initially saw an upward curve between 2014 and 2017, but thereafter it reflected a declining trend. The panel, however, noticed that AAI’s share of the gross revenue earned by MIAL has shown consistently an increasing trend. The panel’s report suggested that audit be conducted to ensure there are no leakages in revenues.

Now we are on Telegram too. Follow us for updates
TAGS
Airport Authority of India PPP model