UTTARAKHAND:  A small step can sometimes bring a big change. The Uttarakhand government took this small step with ‘Gramya Project’ that has benefitted more than 54,000 families across the state. The project aims to conserve catchment areas of water bodies such as rivers, lakes and ponds, helping to increases horticulture produce and catalysing other agricultural activities. Many farmers who were unable to cultivate even for one season now get to farm all three seasons and produce Rabi, Kharif and Zayad crops. This has helped double their income and enhance their standard of living, officials say.

Mukesh Raturi from a village in Tehri district has made his riches through capsicum farming. “Officials associated with the project help us in solving irrigation problems, enabling our hard work to bear fruit. Earier, our efforts did not match our profits,” said Raturi. 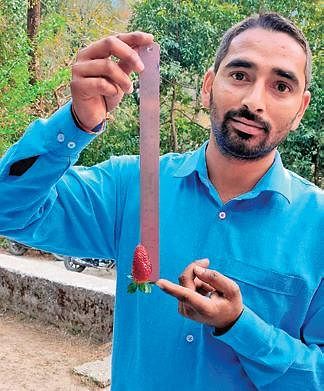 Officials say the project aims to conserve water sources, especially during pre-monsoon times when scorching heat leaves orchards and fields groaning. Project director Neena Grewal says the effort is to conserve and recharge micro-catchment areas across the state, which helps in agriculture and allied farming, especially orchard farmers. “Out of total beneficiaries, over 60 per cent are women. The conservation of water resources has resulted in better production, leading to better lives in Uttarakhand hills,” Grewal said.

Helmed by the state Watershed Management Directorate and funded by the World Bank, the project entails implementing water conversation and harvesting in about 2.638 lakh hectares spread across eight districts and 18 development blocks. It helps as many as 524 gram panchayats with a combined land of about 66,300 hectares, targeting around 3 lakh population.

The project focuses on improving livelihood options for the marginalised population. Apart from helping in irrigation, it helps in training for various farming styles, crops and availability of high yielding varieties of millets and other crops. The hill farmers under the project cultivate a multitude of crops such as strawberries, capsicum, millets, flowers, fruits and others.

“To make the hill agriculture as a profitable venture, promotion of high-yielding offseason varieties through several field demonstrations of improved seeds and packages of practices are being carried out,” said Grewal. “To enhance the income of marginalised farmers, marketing of surplus agri-horticulture produces is of prime concern under the project.”

In accordance with the agribusiness strategy of the project, villagers are grouped in ‘farmers’ interest groups’ and six agribusiness support organisations are in place for institutional strengthening, crop planning, input support plan and market linkages, says the project director. A total of eight watersheds, 116 sub-watersheds and 1,110 micro-watersheds (excluding Haridwar) have been identified for regeneration and sustainable development in a phased manner.

Hard work bears fruit
The hill farmers under the project cultivate a multitude of crops such as strawberries, capsicum, millets, flowers, fruits and others. The project focuses on improving livelihood options for the marginalised population. Out of total beneficiaries, over 60 per cent are women, says the project director.

Now we are on Telegram too. Follow us for updates
TAGS
Gramya Project Uttarakhand