Experts believe the prime reason for such a drastic decline is because of a high infection rate and faster spread of the virus strain in the fourth wave.

NEW DELHI:  The national capital saw 28,000-plus single day Covid cases. June second week: the cases have hovered around 200 per day. Compared to the last three waves that Delhi saw, the fourth one has seen cases drop quickly.

Experts believe the prime reason for such a drastic decline is because of a high infection rate and faster spread of the virus strain in the fourth wave.

“The virus was very infectious. But once the virus circulation started to decline, its transmission too went down. These are interlinked -- the proportion in which it went up and spread, and then came down. A large number of people got infected. They developed immunity too. So, when people are immune, the virus cannot spread further,” said Lalit Kant, former Scientist ‘G’ and Head (Epidemiology and. Communicable 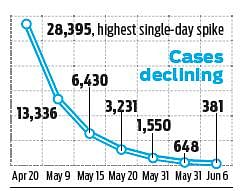 Dr Jugal Kishore, head, Community Medicine at Safdarjung Hospital, says the virus had involved a large number of people in a short span and that’s why the peak went up quickly.

“Now when you have a large number of people infected in a very short span, mild-to-moderate cases take 7-10 days to recover. That is why the graph goes down,” he said.

Experts say lockdowns have a minimal role to play in controlling such waves.

“Lockdown is not the case. If it is because of that, then the peak would have been much delayed and blunt,” said Dr Kishore said.

Now we are on Telegram too. Follow us for updates
TAGS
covid transmission COVID-19 Coronavirus Coronavirus India Delhi coronavirus