Reports said the yatch was intercepted by the Indian Coast Guard on March 5, and she was forcibly sent back to Dubai by helicopter.

NEW DELHI: The UAE government on Monday released recent pictures of Sheikha Latifa bint Mohammed Al Maktoum, the daughter of Dubai’s ruler, who had reportedly tried to escape the country aboard a yatch in March after making a video claiming that she had been imprisoned and tortured for three years for an earlier escape attempt. 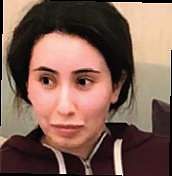 However, reports said the yatch was intercepted by the Indian Coast Guard on March 5, and she was forcibly sent back to Dubai by helicopter. This sparked an uproar among human rights organizations, who demanded proof that the princess was alive and well, and accused New Delhi of violating asylum laws.

Subsequently, there were reports that Prime Minister Narendra Modi himself had ordered the interdiction of the yatch, Nostromo, less than 80 km from the Indian coast near Goa.

One report said the operation involved “three Coast Guard ships ... helicopters and a maritime surveillance aircraft,” and that the Indian government acted after Modi received personal messages from Sheikh Mohammed for help, saying that his daughter had been kidnapped. Other reports said National Security Advisor Ajit Doval had personally supervised the operation.

While India’s External Affairs Minister claimed it was unaware of the incident, the UAE government remained mum until earlier this month, when it released a statement saying it was “deeply saddened by the continued media speculation” about Sheikha Latifa, who was “adored and cherished” by her family, which was looking forward to celebrating her 34th birthday with her.

More from World
Now we are on Telegram too. Follow us for updates
TAGS
UAE princess Sheikha Latifa bint Mohammed Al Maktoum