At least 18 people including 14 foreigners were killed in a bloody Taliban-claimed assault on a luxury hotel in Kabul.

Six other civilians were reported wounded and more than 100 people, including 16 foreigners, have been rescued from the hotel, said Interior Ministry spokesman Najib Danish.

"The security forces are going room-by-room to make sure that there is no any other attacker in the building," he said.

ALSO READ: Islamic State cells operate in Kabul under noses of Afghan and US forces

It was not clear how many people had been inside the hotel, which was attacked by Taliban militants in 2011.

Afghan security forces were still trying to clear the landmark hilltop hotel with at least one attacker on the loose, a security source said. 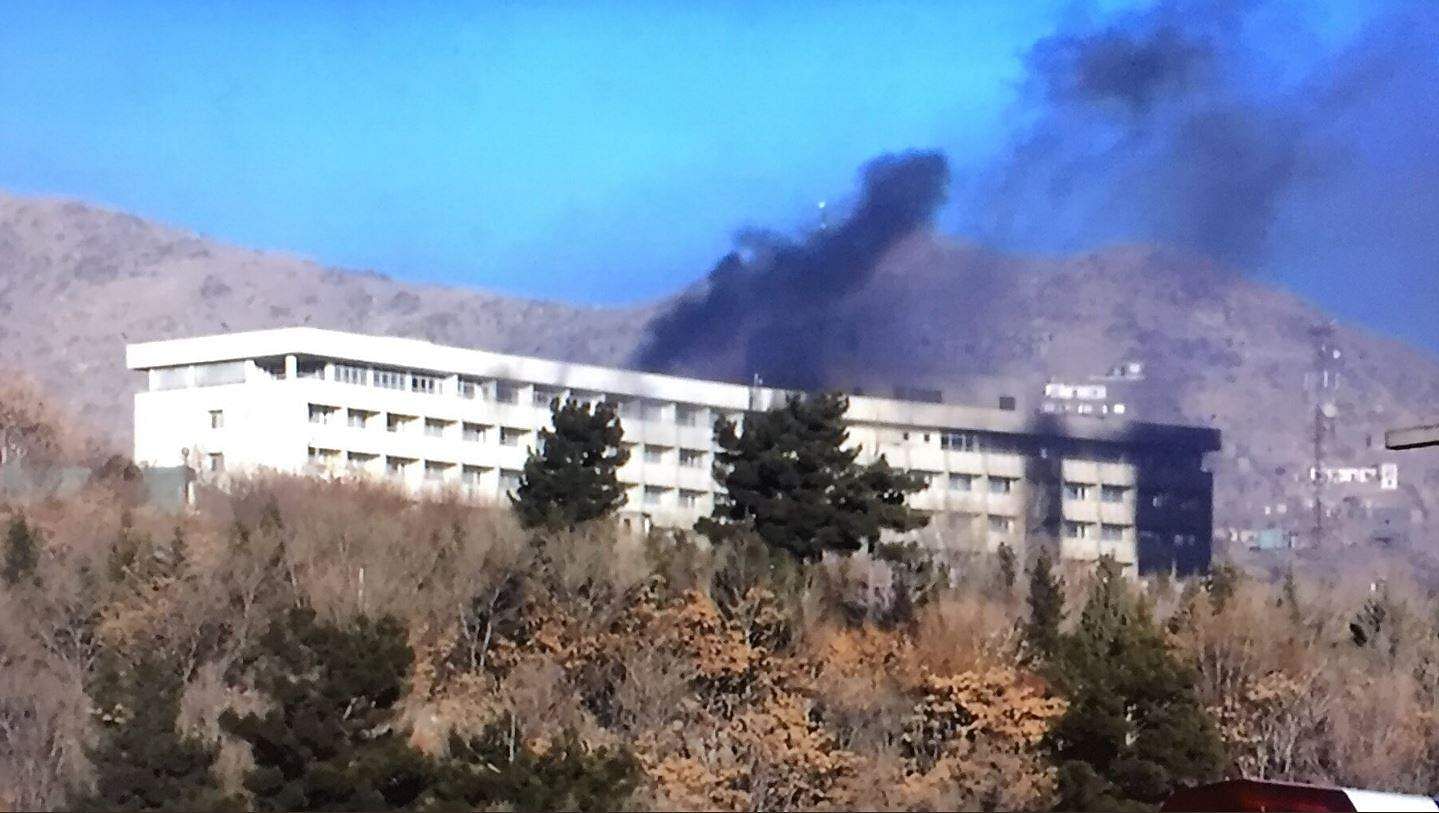 A man dropped himself from the 6th floor of the intercontinental hotel. Two others managed to get to the fifth floor and continue to the next floors. Shocking video #AFG #KabulAttack pic.twitter.com/vxEl4SguNZ

At least one person could be seen climbing over a top-floor balcony using bedsheets to escape, before loosing his grip and plunging to the ground.

Four gunmen burst into the hotel on Saturday night, opening fire on guests and staff and taking dozens of people hostage, including foreigners.

There was no immediate claim of responsibility for the latest assault in the war-torn Afghan capital that followed a series of security warnings in recent days to avoid hotels and other locations frequented by foreigners.

The Intercontinental Hotel is located on a hilltop in the Bagh-e Bala area of the capital and is heavily guarded because it hosts both Afghan and foreign guests as well as official conferences. Last night's attack unfolded almost six years after Taliban insurgents launched a similar assault.

The property is not part of the InterContinental chain of worldwide hotels.

The Interior Ministry said a private firm assumed responsibility for securing the hotel around three weeks ago. The ministry says it is investigating how the attackers managed to enter the building.

Afghan security officials confirmed that 34 provincial officials were gathered at the hotel to participate in a conference organized by the Telecommunication Ministry.

A guest hiding in a room said he could hear gunfire inside the 1960s hotel where dozens of people attending an information technology conference on Sunday were staying.

"I don't know if the attackers are inside the hotel but I can hear gunfire from somewhere near the first floor," the man, who did not want to be named, tolf AFP by telephone.

"We are hiding in our rooms. I beg the security forces to rescue us as soon as possible before they reach and kill us."

His phone was switched off when AFP tried to contact him again.

No one has immediately claimed responsibility for the attack, which started around 9 p.m. Saturday. As the fighting raged, a fire broke out. Firefighters are still battling the blaze. Live TV footage showed people trying to escape through windows on the upper stories.

Capt. Tom Gresback, the spokesman for NATO-led forces, said in a statement that Afghan forces were leading the response efforts. He said that according to initial reports, no foreign troops were hurt in the attack.

Afghan Telecom regional director Aziz Tayeb, who was attending the IT conference, said he saw the attackers enter the hotel as he was walking towards the exit.

"Everything became chaotic in a moment. I hid behind a pillar and I saw people who were enjoying themselves a second ago screaming and fleeing like crazy, and some of them falling down, hit by bullets," Tayeb told AFP.

Local resident Abdul Sattar said he had spoken by phone to some of his friends who are chefs and waiters at the hotel and had been trapped inside.

"Suddenly they attacked the dinner gathering... (then) they broke into the rooms, took some people hostage and they opened fire on some of them," he told AFP.

Rahimi said the attackers were armed with small weapons and rocket-propelled grenades when they stormed the hotel, which is a popular venue for weddings, conferences and political gatherings.

The last major attack on a high-end hotel in Kabul was in March 2014 when four teenage gunmen raided the Serena, killing nine people including AFP journalist Sardar Ahmad.

The Intercontinental was previously targeted in June 2011 when a suicide attack claimed by the Taliban killed 21 people, including 10 civilians.

Security at the Intercontinental is relatively lax compared with other luxury hotels in Kabul.

Even before the attack was over, authorities were questioning how the assailants got past the hotel's security, which was taken over by a private company three weeks ago, Danish said.

"We will investigate it," he said.

A hotel employee told AFP that as he fled the staff living quarters located in a building next to the hotel he saw the new security guards running for their lives.

"They didn't do anything, they didn't attack. They had no experience," the man said on the condition of anonymity.

Afghan forces have struggled to combat the Taliban since the U.S. and NATO formally concluded their combat mission at the end of 2014. They have also had to contend with a growing Islamic State affiliate that has carried out a number of massive attacks in recent years.

Now we are on Telegram too. Follow us for updates
TAGS
Terrorism Kabul hotel attack Intercontinental Hotel Afghanistan suicide attack