Threat of epidemic looms over Patna as water recedes

Over 2.5 lakh residents of Patna, who have been severely affected by the floods following incessant rain for last four days, are now facing the threat of water-borne diseases.

PATNA: Over 2.5 lakh residents of Patna, who have been severely affected by the floods following incessant rain for last four days, are now facing the threat of water-borne diseases.The state death toll soared to 73 on Thursday even as residents remain stranded in waterlogged areas, including Rajendranagar and Kankerbag located in Patna.

“We are at the risk of a major outbreak of waterborne communicable disease like diarrhoea, viral fever and skin diseases as thousands of carcasses of animals, snakes and other aquatic reptiles are floating across the waterlogged areas,” said a senior doctor. Forces involved in relief and rescue operations are fishing out rotting corpses from water-logged areas in several places. 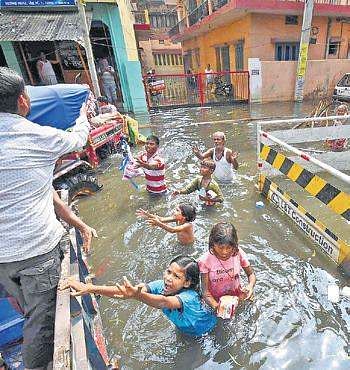 Several areas can now turn into a breeding ground for mosquitoes leading to spread of dengue and malaria if proper fogging is not done, said Dr Rajiv Ranjan, a physician.Patna District Magistrate Kumar Ravi said that 75 teams of healthcare personnel have been involved in sprinkling of bleaching powder and fogging. Packets of bleaching power and medical kits have also been distributed to all the houses still under water.

Patna Civil Surgeon Dr R K Choudhary said that all primary healthcare centres have been supplied with medicines including the anti venom vials for cases of snake bite. Many localities have been rid of inundation by now as sump houses have been working overtime and heavy duty pumps have been brought in from Chhattisgarh to flush out the water with greater speed. “Around 39 big pumping motors are draining out water. Among them 8 mega dewatering machines have been engaged which drain out 10,689 litres of water per hour,” said Ravi.

The IAF choppers carrying out relief and rescue operations for last two days have dropped 25,000 packets of food. “More than 1, 24,750 bottles of drinking water have been distributed besides 21,500 packets of milk,”he said.

Meanwhile, hundreds of residents irked at failure of district administration in clearing waterlogging in areas, blocked NH-30 and road communication at many places for the second consecutive day on Thursday.

Seven passengers, including a man and his one-year-old son were killed, while 18 other passengers were hurt, 12 of them seriously, when the bus they were travelling in plunged into the rain-fed Richhan river in Raisen district of Madhya Pradesh on Wednesday-Thursday night. The state government announced compensation of `4 lakh each to the seven bereaved families.

According to Raisen DSP Monika Shukla, the driver of the bus, who is untraceable has been booked under Section 304A of IPC for causing death by negligence.

Stay up to date on all the latest Delhi news with The New Indian Express App. Download now
TAGS
Patna rains