Delhi Police participated in February riots, there was 'deliberate inaction' by them: Panel

It cited instances of the policemen sexually harassing Muslim women and engaging in violence and abuse during the riots.

NEW DELHI: The Delhi Minorities Commission has made scathing remarks against the Delhi police for its role in the North East Delhi communal riots, suggesting that the "failure to prevent communal violence was not due to individual or sporadic breaches, but was a pattern of deliberate inaction over several days.”

Releasing its fact-finding report on Thursday, the panel raised several questions on the role of police, cited instances of sexual harassment of Muslim women by the cops and also instances of police engaging in direct violence and abuse during the riots that broke out in North East in February this year. 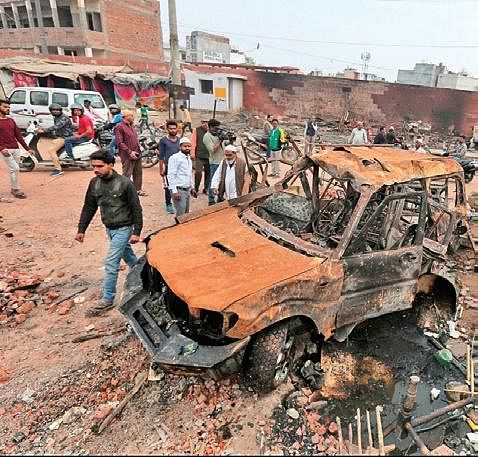 Narratives of women suggest that the police forces and violent mobs attacked anti-CAA-NRC protest sites, women were beaten up by male police officers and attacked by mobs, according to the report.

“Police used the chants of ‘Azadi' to sexually harass women and attack them, including at least one incident of a police officer flashing his genitals in front of women protestors. The verbal abuses were also sexual and communal in nature. It is clear that the police did not come forward to help and, in several instances, resorted to violence towards women,” the panel said.

The commission in its report has said that “Police officials were either mute spectators or, in some cases, even alleged participants.” Based on the accounts of eyewitnesses, many of who said that police did not respond to distress calls, the panel concluded pattern of deliberate inaction by police over days preceding to the riots.

The chairperson of the DMC fact-finding committee, advocate MR Shamshad, in his introductory remarks in the report claimed that “Partisanship and bias on the part of the Police and Government have led to the abject failure of duty and of the law and order machinery in the Capital of India. Investigations have purposefully been misdirected to change the narrative of the cause of the violence that erupted in the North-East district of Delhi.”

Indicating that the chargesheets were biased in nature, the minorities commission has said that the incendiary speeches made by BJP leaders like Kapil Mishra were ignored by the police. “Non-registration of FIRs or delayed action on complaints naming the accused of riots, loot, arson and murder has led to no investigation in many crucial cases. Cases like the shooting from Mohan Nursing Home, instigating and inflammatory statements of Shri Kapil Mishra, have not been registered despite High Court’s observation.”

The report attempts to point out flaws in the sequence of events as claimed by Delhi Police that led up to the communal riots in which over 50 people lost their lives.

“Almost all the North East Delhi violence-related cases that Police are investigating are based on the premise that riots were planned by anti-CAA protesters to coincide with the US President Donald Trump’s visit to India in the third week of February. The first reference to the forthcoming Trump visit was published in India on 13 January while the alleged meeting of the “conspirators” is claimed by police to have been held on 8 January 2020.”

The Delhi Minorities Commission also poked holes in the chargesheets filed by Delhi Police. “Crucial aspects of the entire chain of events are missing from most of the chargesheets that have been filed till date.”

The report goes on to claim bias in the police investigations.

“In most cases, chargesheets have been filed by police first against Muslim accused and the entire narrative has been changed to one of violence on both sides rather than a pogrom that was in fact carried out. This is a serious issue of changing public perception by attributing the riots to CAA protestors in general and Muslims in particular. This reflects injustice and partisan bias in the system which is neither good for a democratic system nor for our nation as whole,” the minorities commission in its report stated.

Shamshad alleged collusion of the “administration and police” in triggering a large scale violence with the objective of crushing the peaceful anti-CAA protests.

The report stated that “the same discriminatory bias and hate became the reason for the minorities to take a lead in the protests against the discriminatory CAA. The protests were legitimate and peaceful. Seemingly, to crush the protests, with support of the Administration and Police, a retaliatory plan of pro-CAA protesters was worked out to trigger violence at a large scale which led to loss of lives and damage to hundreds of properties owned mainly by the Muslim religious minority.”

The report highlights testimonies of several women from the Chand Bagh area, one of the worst affected areas by communal violence, who “described how they were attacked by the police…Police forces attacked women at the protest site, and later did not provide any help or support when the mob attacked the protesters in the same area. These physical attacks on women were carried out by male police officers. Several women suffered grievous injuries.”

According to the testimony of a Muslim woman who was pregnant at the time of violence, she “received 35 stitches after being hit by the police at the Chand Bagh protest site”

“Police started attacking the protesters who were at Chand Bagh and they brutally beat up a few men who were also present at the protest site…Women also stated that it was the police who started the violence at Chand Bagh. The protesters were peacefully sitting there, and it was after the police attacked that the mob also gathered. In that tumult, several women were injured,” the report states. The panel also cited non-cooperation from Delhi police in preparing the fact-finding report, saying police did not share information sought by them for compiling the report.

The committee was constituted by the Delhi Minorities Commission in March to probe the riots that claimed 53 lives and left more than 400 injured.

Now we are on Telegram too. Follow us for updates
TAGS
Delhi Riots Delhi violence Delhi Police Delhi riots 2020