Three Delhi-NCR residents in association with SEEDS (Sustainable Environment and Ecological Development Society) are using their art to raise funds for a Darjeeling based school that is struggling to pay staff salaries. Supported by SEEDS (Sustainable Environment and Ecological Development Society), under the Art For a Cause initiative, artworks by Class 12 student Dhruv Bheda, School of Planning and Architecture former Dean of Studies, Kavas Kapadia, and Architect Kamal Kishore who works on disaster response and risk reduction, will be auctioned. SEEDS Co-Founder Anshu Sharma says, “Proceeds from the sale of these 17 paintings will go towards Evergreen English School at Pokhriabong Tea Estate in Darjeeling. 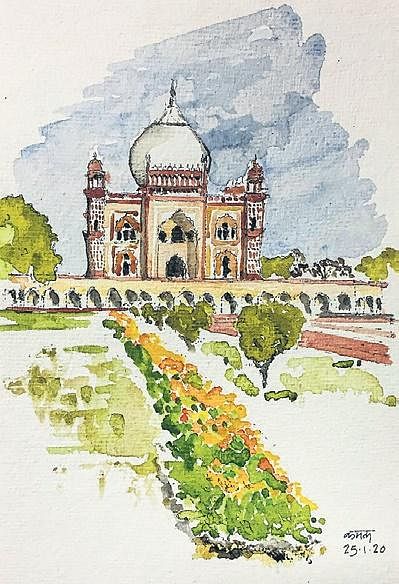 The pandemic has affected millions of lives. People lost their jobs, schools are shut and families are barely living on the remaining expenses. Equally hit were many tea gardens in Darjeeling that have not paid wages to their workers. Seeing their plight, the school authorities waived off school fees of their children but paid staff salaries. Now with funds drying up, it is becoming difficult to keep the school functioning.” Bheda, 17, a student at Kunskapsskolan International School, Gurugram, and an avid painter, gave his six artworks for the cause.

Made using pens, crayons and inks, these paintings are on nature and Mother Earth. Kapadia’s six water colour paintings on canvas, and Kishore’s five pencil and ink sketches and water colour paintings on architecture are also on display. Kapadia is providing selective consultancy, reviving his sketching skills post retirement and is learning digital art, while Kishore, after a three-decade career, took to sketching as a hobby five years ago.

Sharma reveals that the three are long-term supporters of SEEDS and have supported the organisation’s disaster relief campaigns on a number of occasions in the past. “Triggered by a conversation with one of them, we reached out to the others in the group, and everyone got really excited about the idea of raising funds through art,” says Sharma.

Bheda has been collecting funds for SEEDS since Class 5. “I have complete faith in them as I always receive detailed descriptions of what the money I raised is being used for,” says Bheda, adding that, “What matters is helping people, whether they are from Darjeeling or Delhi.” Sharma informs that Bheda first donated to SEEDS for disaster relief work after severe flash floods in Uttarakhand in 2013 that washed away a number of schools.

“He was a little kid in primary school, and came to our office with a bagful of change from his piggy bank… around Rs 7,000. It took us time to count it, but he waited patiently to get his receipt. He asked a lot of questions, taking great satisfaction learning about the schools that were being rebuilt by us. Since then, he has donated whenever there has been a major disaster.” SEEDS has been running relief distributions in Delhi and major cities since the beginning of the lockdown. Of the total estimated, Rs 8 lakh, they have raised one-third through their consistent supporters.

“We want to raise funds for the staff salaries, add basic infrastructure, and include safety features to Evergreen English School. We may go for further crowdfunding rounds if we fall short of our target,” adds Sharma. The curated paintings are live on: https://sites.google. com/view/seedsartforacause/ the-paintings.

Now we are on Telegram too. Follow us for updates
TAGS
Painting Darjeeling school SEEDS