'Pretham 2' review: Jayasurya and a few cool ideas make this a watchable flick

For something that claims to be a horror-comedy, Pretham 2 doesn’t have much in the way of horror or comedy — which was also the case with its predecessor.

For his sequel to 2016’s Pretham, Ranjith Sankar places Jayasurya’s mentalist John Don Bosco in Varikkasseri Mana, a location made famous through some of the most popular ‘mass’ entertainers, including Devasuram. At least four out of those were Shaji Kailas films — beginning with Aaram Thampuran to the much recent Simhasanam. And it makes sense why filmmakers often opt for this place. The ‘mass’ aura of a Malayalam movie hero is automatically amplified once he sets foot in Varikkasseri Mana. 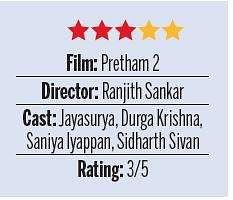 Now that I’ve brought up Shaji Kailas, I have to say that Pretham 2 feels more like a Shaji Kailas film (sans the fiery dialogues) than a scary supernatural film. John Don Bosco even gets a ‘mass’ scene that we didn’t get in the first part. The scene in question has a police officer trying to intimidate Don Bosco, Shaji Kailas-style, and ends up getting humiliated. And it’s not a Suresh Gopi-style punch dialogue that does it: Don Bosco simply whispers a dirty secret about the officer that no one else knows about. Why use your physical prowess when you have got the mental prowess, right?

The sequel also sees John Don Bosco doubling the charm. This time we have a different set of guys who are moaning about the fact that Don Bosco gets to talk effortlessly to all the pretty girls. Jayasurya also gets such a cool wardrobe (courtesy of his wife Saritha Jayasurya) that you start picturing yourself in them. Jayasurya is one factor that keeps this film afloat, the other being its ingenious concept which makes statements about movie piracy and social media trolls. I imagine Ranjith Sankar’s mind operates in the same way as that of the other Shankar (Tamil director). If 2.0 had a mini-budget, less ambitious Malayali cousin, Pretham 2 would be it. There is a new spooky incident to solve, and Don Bosco gets to work.

For something that claims to be a horror-comedy, Pretham 2 doesn’t have much in the way of horror or comedy — which was also the case with its predecessor. But it has some cool ideas which I think are worth exploring and talking about. By cloaking social messages in pre-established genre tropes, Ranjith Sankar did something different with the first Pretham, and he does the same with the sequel too. But that’s about it. His films are slightly sophisticated versions of the horror films director Vinayan used to do at one point.

This is not a film to be seen with an arthouse mentality. If you watch it with an open mind, you might find fun in a few places. I did.Although the sequel is a big improvement over the original, some of the lowbrow, juvenile humour from the first repeats itself in this too. I assume most of the jokes — which are straight out of a thousand mimicry shows — are aimed at school kids and teenagers. This brand of humour doesn’t work for me anymore. But I would be lying if I said that Sidhartha Siva’s Mohanlal obsession didn’t make me laugh in a couple of places.

Though the female characters don’t have much to do other than look good and remain mostly in the background, their presence in the story makes sense from a storytelling point of view. But it’s the men who do most of the talking. It’s their show. Ranjith Sankar is a strange filmmaker. It’s hard to gauge exactly what his philosophy is. We sense in his films an attempt to please all groups. He seems to have so many things to say but never bothers to take that extra leap.

His ideas are quite audacious but he prefers to play it safe.In his previous films Ramante Edanthottam and Njan Marykutty, he focused on female empowerment and LGBTQ empowerment respectively, but in Pretham 2, we once again see male characters who seem to have sex on their mind all the time. It may not have bothered the two female characters in the film but it certainly did bother me. In one scene, a male character cautions another, “Be careful of what you say to her. This is the age of MeToo.” I wonder where this thought was when, in a much earlier scene, he was touching a 17-year-old girl’s leg while she is busy with acrobatics?

The second half is more gripping, with Don Bosco coming up with a plan to find a criminal mastermind.  There is one thing about the Pretham films that I noticed, and it’s their ability to ‘read’ viewers’ minds, just like how Don Bosco does with the film’s supporting cast. Much thought seems to have gone into predicting how the audience would respond to a particular scene. There was one specific moment in Pretham where one character blurts out exactly what the audience was thinking about. Such moments are there in Pretham 2 as well.

I watched the film at Kochi’s Savitha’s theatre, and during the long build-up in the finale, a guy next to me was asking out loud, “Are they ever going to reveal who it is?”, and a couple of minutes later, Sidhartha Siva quips, “They will never reveal it!” That was fun.