Long-lost lovers fitting together again — like two pieces in a jigsaw puzzle — just for an evening, after more than a decade, is a dreamy idea.

96 works beautifully in theory… in the head. Long-lost lovers fitting together again — like two pieces in a jigsaw puzzle — just for an evening, after more than a decade, is a dreamy idea. He’s Ram (Vijay Sethupathi), and she’s, no surprises, his Janaki (Trisha). He’s become a photographer, and sought refuge in the very thing that’s shown to be responsible for his separation from her: Nature… Fate, destiny, call it what you will. There’s an opening card before the film begins, a word of gratitude to nature from the director. Every once in a while, there’s a nature shot to remind you of the force that seemingly governs us all, of the paths we are unwittingly guided into taking. There’s a shot of a couple of parrots on a tree. There’s one of a butterfly landing on a flower. There’s the insinuation of this incomprehensible force; the sort that brings in Ram’s students to a café at midnight. It could be an annoying coincidence; it could be another of life’s inexplicable turns. You pick. 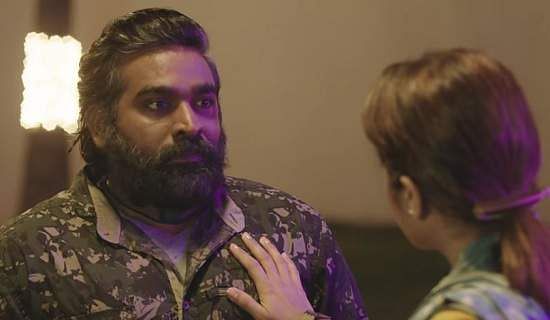 He’s also a photographer because, as he says, “It’s the only way to freeze time.” It’s a facet he’s irresistibly attracted to, for it defines him in a way. He’s stuck to his past, a beautiful time in 1996 when he was in school. A time that fate cruelly snatched from him, but no, he wouldn’t move on, and lose that battle with time. He’s clung, savouring those times in his head — and in that box of memories he has stored at home. What if the central figure from his past — Janu (Trisha) — suddenly stood in front of him? What if he spent an entire evening with her, an evening of conversations?

Its our version of Before Sunset in a sense. The man’s married there; the woman’s married here. The key difference — and it can really throw you off, like it did me — is that unlike in Linklater’s film, the couple here hit off almost immediately. It’s like mere hours have passed since they last met, not years. I had a hard time buying that these two, who change must have conspired to transform, resume almost with the same fervour. Sure, people, in a sense, return to their former selves when they meet those from their past, but surely, some layers would first have to be peeled. The other issue here, is how young Ram and Janu are when they first fall in love. In the present, they are well and truly into adulthood, and it’s convenient writing that they resume as they left.

But make no mistake, 96 is a fascinating film, a fascinating idea. It’s a film that asks all sorts of questions about the nature of love and marriage. What’s, say, infidelity? Is it spending a night at your soulmate’s house without the knowledge of your husband? Is it dreading the arrival of dawn (“Vidiyalum irulaai varudhe”)? Or is it being forced into a lifetime with a man, while you are in love with somebody else? When does a woman cross boundaries? Is it when she places her palm on a man’s chest? Is it when she smells his shirt in deep, soulful longing? And what are these boundaries anyway? This bittersweet film is an ode to the complexity of human relationships, specifically of love.

It’s of love, sure, but it’s also of nostalgia. There’s nostalgia of the variety shown in films like Autograph and Thulluvadho Ilamai, when a grown man walks the corridors of his school, savouring the smells and the sights. If only he could return to those days, just to experience those events one more time. Change, however, is indefatigable. That’s why the film starts with a line from the beautiful Anthathi: Maatrangale Vinaa, Maatrangale Vidai. Ram interacts with his watchman, feels the ghosts of his past. And when his memories take him prisoner, director Prem Kumar takes you into the past with him. The teenagers in the flashback — especially the girl who plays little Janu — are terrific. They are so good that I suspect I cared about them more than I did about the adults they become.

The nostalgia isn’t just in Ram’s return to his school. It’s in summoning his classmates for a reunion; it’s in creating a WhatsApp group to know them all again. That entire WhatsApp conversation is tastefully done, with the messages turning into voices for the screen. The nostalgia’s also there in all the renditions of Ilaiyaraaja songs. Janaki isn’t named only so she can fall in love with Ram; she’s named after the eponymous playback singer, and has inherited a haunting voice to boot. There’s no moving on from it for someone like Ram, not while you’re surrounded by televisions. Songs like Aasai Adhigam Vechu and Thendral Vandhu Theendum Bodhu get acapella renditions that hold the quiet theatre in a trance. There’s a wonderful hook here concerning the song, Yamunai Aatrile, that comes full circle into the characters’ adulthood. Vijay Sethupathi sells the scene beautifully. There’s a power cut at night. He could just savour the voice, but he knows he can’t. He needs the visual. He stumbles, runs, makes a mess of his room, and runs back with a light that leaves Janu’s face aglow. He needs that snapshot for the memory box in his head.

It’s tempting to think of 96 as a musical, given the magnificence of the songs and the piano-dominated score. The order of songs in the playlist is the order in which they are used in this film. The Nasser monologue at the end of Anthathi, in a sense, is the story. I couldn’t shake off the notion though that the film’s events struggled to match up to the evocativeness of the score. It’s likely because 96 keeps succumbing to some evident writing temptations. It’s enough to see Ram flinch when Janu gets dangerously close to him, without having to show in a later scene pay exaggerated respect to her thaali. It’s enough to see Janu and Ram be in each other’s presence for the first time in more than a decade, withou her having to touch his chest. These touches felt forced, and in a story about the delicious complexity of reality, they ended up keeping me at arm’s length from these characters.

Frankly, I don’t think I bought Trisha’s Janu too much. Vijay Sethupathi manages to bring texture to a person like Ram, who’s rather easily understood. Janu’s more complex. She’s married with a child, and yet stuck to an unfinished relationship. Yet, you never get these layers from the performance. Their respective monologues over the events at Janu’s wedding sum up the difference. She gets the lengthier dialogue, but leaves you feeling fairly underwhelmed. He gets lesser lines, but sells it with depth. The sort of aloofness that belonged to a Jessie (Vinnaithaandi Varuvaaya) seems misplaced in Janu, who’s in want of more humanising.

I needed to sense more conflict. And isn’t that what differentiates adults from idealistic teenagers anyway? A sense of doubt, a sense of confusion, a sense of reluctance to peel off the layers. What’s Janu thinking as she’s stopped from saying words she can never forget? What’s she thinking as she teases Ram about his sex life? I wanted to see some sign of the adults they have become — specifically Janu.

Vijay Sethupathi plays his character with a beautiful reluctance to cross boundaries. For every step he takes forward, he takes an instinctive step backward. He drops Janu at the hotel, and refuses her invitation to go on a drive. He can’t accept it, and yet, can’t leave that hotel. He needs closure. “Enga unna vitteno, angeye dhaan irukken.” He may as well have used the same line as his Facebook relationship status. There’s a saloon metaphor somewhere, as Janu unveils the Ram she knew from the changes he’s undergone during their separation. But really, she needn’t have. Ram’s very much the same. It’s she who needed to be cajoled to return to her older self, on account of the irrevocable changes in her life. 96 is a story, an idea, I loved a bit too much, not to care about these missteps. It needed to be a bit more bitingly real.

And yet, 96, no doubt, works. It works better in the head, but that’s the effect of the film too. In thinking about the last scene, the one with the memory box, I got reminded of a Rumi poem: “Out there, beyond all concepts of right and wrong, is a field; I will meet you there…” A sense of what could be, what could have been. It’s true of the characters… and the film.