Writer-director Sanjib Dey has a gift for storytelling. His "III Smoking Barrels", an anthology of three stories with Far East India as the backdrop, is a film to treasure.

Writer-director Sanjib Dey has a gift for storytelling. His "III Smoking Barrels", an anthology of three stories with Far East India as the backdrop, is a film to treasure. It is an understated portrait of the intriguing and relatively untouched, unexplored and isolated states of the country.

The stories are simple and relatively local, yet have a universal appeal that explore different stages of human life. Each story is layered with subtle nuances and is designed uniquely to portray the director's strengths. And another common thread that binds the collection of stories is that there is a gun involved in every story.

The first story is a road film about Janice (Shiny Gogoi) a child who on escaping from a rebel camp hijacks Anuraag Dutta (Indraneil Sengupta). Anuraag, an engineer, is on his way to Guwahati from Manipur. He finds the stowaway with a pistol in his car, and obliges her. During their journey, without getting into the details of the local politics, we are exposed to Janice's plight that tells us of the traumatic issues of the children involved in armed conflicts. 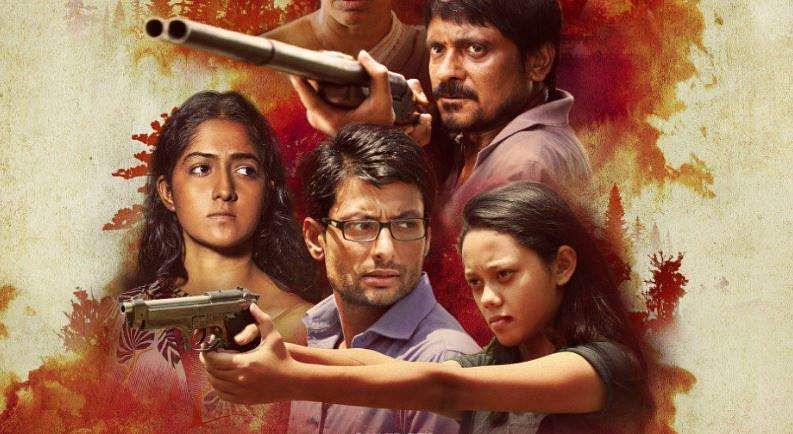 The second story shifts into an urban territory and delves into the growing drug menace in the region. Set in Guwahati, the narrative intertwines the lives of Donnie (Siddharth Boro) an engineering dropout who gets sucked into the world of drugs and his anxious mother essayed by Mandakini Goswami.

The third film, set near the India-Bhutan border, explores the sad but treacherous life of Mukhtar -- an ivory poacher -- who along with his friend Ikram (Nalneesh Neel) ends up killing 15 elephants to survive. This tale takes you into the heart of rural India, exposing survival instincts, exploitation and self-realisation.

It is the virgin landscape that holds your attention, apart from the stories and the brilliant natural performances by every character that break into Meitei, Nagamese, Assamese, Hindi and English. The film has a neo-realistic feel. Each story offers you an exceptional and distinctive setting. The hilly terrain of Manipur, Moreh, the India-Myanmar border, the forests in the India-Bhutan Border are all worth a watch.

Mounted with moderate production values, the film boasts of excellent technical qualities. The mellifluous songs add an ethereal flavour to the narrative and together with the background score, they enhance the viewing experience.

Now we are on Telegram too. Follow us for updates
TAGS
III Smoking Barrels Sanjib Dey Indraneil Sengupta