Furkin is now lurking in Puducherry with the Virgin Mary, and Chidambaram asks Meena to team up with the French agent Karoline to save the day.

Do you know Furkin?” asks a French agent. “I may be a bachelor but I am not a virgin, man. I know 14 different types of f***ing,” says CBI Director Chidambaram (Y Gee Mahendra). And trust me, that’s the most bearable joke of the first season of Karoline Kamakshi, an action-comedy series, which stars Meena (in her comeback to Tamil) and model-turned-actor Giorgia Andriani in the titular roles.

This show is based on a supposedly original concept by Vivek Kumar Kannan — a French detective named Karoline (Giorgia Andriani) and a Brahmin CBI officer, Kamakshi (Meena), have to track down international smuggler Furkin and stop him from selling a valuable artifact (called Virgin Mary)
that he stole from the fictitious National Museum of Paris.

Furkin is now lurking in Puducherry with the Virgin Mary, and Chidambaram asks Meena to team up with the French agent Karoline to save the day. The Tamil wife refuses. She has left that life behind her after entering wedlock. This is supposed to be a meta-reference to the life of Meena before and after marriage but it doesn’t land well. Currently, Kamakshi likes to doze off during work and be a ‘comedy piece’ in the office.

All it takes for Kamakshi to take up the mission is a brief conversation with her daughter (the child artiste tries, unsuccessfully, to emulate Meena’s real daughter, Nainika’s mannerisms from Theri). The daughter says she will turn out to be a loser like her mom if she continued to be a non-person. Now, this idea would have worked if the scene had been stitched into the show seamlessly, but Karoline Kamakshi looks like a mash-up of scenes and the onus is on the viewer to understand the intentions of the director.

The problem with Karoline Kamakshi is that it is not even so bad that it is good; it is just bad. The show is just banal and fails to invoke any sort of emotions from the viewer. It has all the set pieces for an action-comedy — a sirippu police, a quirky character who is reminiscent of Daniel’s Romba Sumaar Moonji Kumar, and a caricature of a heroine. The intention seems to have been to make a web-series version of something like Gulaebaghavali. But with the weak writing, nothing pays off. I caught myself laughing in just one scene, which is hugely inspired by Karthik Subbaraj’s Jigarthanda, and the moment I realised that the laughter faded away.

Costume designer Hina and art director Arusamy are the only ones who stand out with their work, where Meena is unable to make a difference. It is sad to see Meena’s potential being squandered in this underwritten show; she deserves better. The writing, in fact, makes Meena look like a bad performer. As far as Giorgia Andriani is concerned, the makers save us the trouble of watching her struggle to mouth her dialogues. We hardly get to see her face when she speaks. A little more of that awareness from the creators would have saved us from the show. 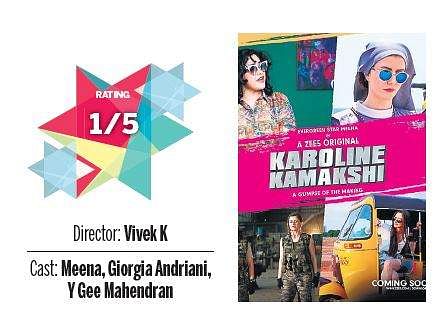 Stay up to date on all the latest Entertainment Review news with The New Indian Express App. Download now
(Get the news that matters from New Indian Express on WhatsApp. Click this link and hit 'Click to Subscribe'. Follow the instructions after that.)
TAGS
Karoline Kamakshi Meena