Pandit Radhemohan Rathod (Naseeruddin Shah) is a creature of snobbish disdain. “Koi speaker phat gaya kya? (Has a speaker burst?)” he groans upon exposure to thumpy pop music. Yet, at a morning riyaaz with his grandson, he patiently lays out the concept of ‘jod’ — fusion — in classical music. “Think of ragas as colours,” he says, “...they must blend in order to evolve.” Bandish Bandits presents music as a confluence, a complex intermingling that transports and transforms. Streaming on Amazon Prime Video, the 10-episode series follows two singers from contrasting milieus. 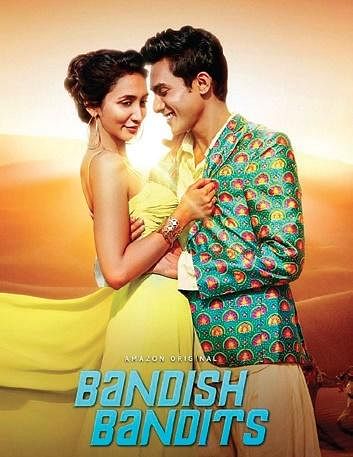 Radhe (Ritwik Bhowmik), a prodigious vocalist from Jodhpur’s Rathod gharana, falls in love with Tamanna (Shreya Choudhary), a rising pop star. Their romance is sundered by issues of tradition, family and self-actualisation. Bolstered by Shankar- Ehsaan-Loy ’s dazzling soundtrack, the show celebrates Hindustani classical traditions while exploring its awkward transition into the modern world. As a music satire, it’s rife, self-aware and often funny. Yet, the investment in musical complexities is let down by the general writing, which is rickety to say the least.

The dialogues are comically overblown. “Wearing skimpy clothes and shouting isn’t music,” Radhe sneers. Tamannah retorts that classical singing is like ‘someone strangling a goat’. This isn’t how intelligent performers converse, no matter how varied their backgrounds. In fact, the more Bandish Bandits tries to complicate its premise, the more it fails. Conflicts are introduced and resolved in a haphazard way. After discovering each other at a concert, Radhe joins Tammana to make a pop song. His grandfather is hard-nosed about their clan’s purity, so they proceed in secret. Later, he fixes his marriage with another girl. Radhe’s family is in hock to the bank. Tammana is edgy about her mom. Radhe and Tammana are pitted by the music company.

Around midway, Atul Kulkarni appears and the story flips into samurai mode, with ancient codes of honour and competitive duels. There’s even a ‘wax on, wax off ’ montage that belongs in a martial arts movie, not a blissful musical romance. Between the leads, Ritwik Bhowmick shines as the protege chafing under his grandpa’s glare. At the risk of great repetition, we return every so often to their courtyard sessions. Naseeruddin Shah anchors these bits with a measured focus, bad notes stinging his face like bees. Though he doesn’t talk much or move around, the tension is palpable, his pained eyes short for ‘not quite my tempo’. The momentum snags, and once Panditji takes ill and fades from the drama, so does the show’s unflagging energy. Bandish Bandits highlights the everyday struggles of virtuoso gharanas. Panditji, despite his family’s plight, won’t sing for films or take corporate shows. Radhe’s guilt at crossing over is fueled by loyalty towards his clan.

His uncle (a delightful Amit Mistry) creates a ‘Devlin’ — a cross between a sarangi and a violin. He shops around for buyers but won’t sell it without his name. There is also a glimpse of the slipping patronage from entrenched royal families. While the observations are fair, the show blames the erosion of Hindustani classical on its practitioners — on their refusal to adapt and move with times than the crushing demands of the market itself. Director Anand Tiwari captures a bright, vivid Jodhpur. There’s a lot of attention to local colour, fabric, and food.

The album swings between severity and surprise, culminating in a glitter bomb of a song that is Chedkhaniyaan. Had the narrative beats landed as well, Bandish Bandits would have soared over competitors. The early scenes — Radhe bucking up and kissing Tamannah at a party, Tamannah taking offence at a shade — are fresh and involving. Once that passes, the show feels like a flash in an already cramped OTT pan.