'Work It' review: A simple teenage dance drama with a twist

Unlike in your typical high-school dance film, ‘dance’ isn’t the strongest aspect of Work It. Even the final face-off feels more like a Zumba class.

Almost every dance film out there urges you to “dance like your life depended on it”. The dance crew at the heart of the film usually takes this advice very seriously and dances like there’s no tomorrow. It’s part of what makes these films tick.

In 'Work It' though, the mantra seems to have been, “Dance like nobody’s watching.” The characters are delightfully clumsy, and dance to have fun, not so much as a means to please you, and this vibe is highly infectious. 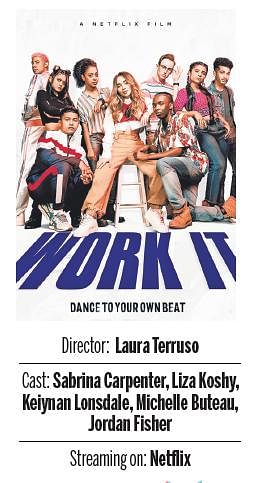 Quinn Acker (Sabrina Carpenter) is a Ted Talklistening, high school nerd who most top universities would love to have. But her favourite university finds her to be pretty ordinary and lacking the special skills ‘that should drive one out of bed.’

She is forced to lie about being a part of her school dance team. Quinn then is left with the unenviable task of putting together a dance team from scratch within two months. Her journey to accomplish this herculean task with the aid of her best friend Jasmine Hale (Liza Koshy) results in a highly funny, partly moving ride. Unlike in your typical high-school dance film, ‘dance’ isn’t the strongest aspect of Work It. Even the final face-off feels more like a Zumba class.

But the stellar cast covers all these flaws with contagious cheeriness. When Jasmine tries explaining ‘flossing’ to Quinn, she assumes it must be something pertaining to oral hygiene. Asked about her style of dance, she dubs herself the ‘Illuminator’, given that she has only handled the lighting system for performances previously. Such light-hearted mirth results in a movie that works better than you expect it would. Despite sticking to the age-old formula of ‘an underdog team’s struggle to glory’, the film is self-aware enough to take a dig at itself every now and then.

I particularly enjoyed the recruitment sequence akin to Shaolin Soccer, where Quinn and Jasmine pick random people for their odd skills. Setting the mood right in the first act is essential for any film to establish a connection with its audience. Work It does this like a charm, and we realise what we have signed up for right from the beginning. Despite its inherent predictability, the story flows seamlessly, the dialogues are riotous and the music is great too. Make no mistake, Work It won’t go down in history for being up there among the best dance films, but it’s the sort of film you will enjoy secretly — and who knows, it could even be the sort of film to go on to attain cult popularity.

Now we are on Telegram too. Follow us for updates
TAGS
Work It Work It review Sabrina Carpenter Liza Koshy

'The Devil All the Time' review: Devil takes centre stage in this dark, twisted thriller

'Masaba Masaba' series review: Not quite the showstopper