Anil Kapoor, Anurag Kashyap throw down in a fun thriller

An intriguing poster had gone out — and still keeps popping up in cinephile circles.

As many are aware, Anurag Kashyap and Anil Kapoor have a long history. In 2003, they were meant to work together on Allwyn Kalicharan, a one-of-its-kind dystopian thriller set in Delhi. An intriguing poster had gone out — and still keeps popping up in cinephile circles. But the actual film never got made, with Anurag blaming Anil for thwarting the project.

“I suffered a lot because of Anil Kapoor,” he said in a 2007 interview, “and I will not forget it.” Forget it he has not — at least on screen. In Vikramaditya Motwane’s meta-fictional thriller, AK vs AK, Anurag and Anil turn up as zanier versions of themselves. Anurag, attending a talk with Anil, reminds the 64-year-old actor that his time has passed. “He’s still trying to be a hero,” he tells a laughing crowd. Hearing this, Anil flips on his shades and drops water on Anurag’s shoes. 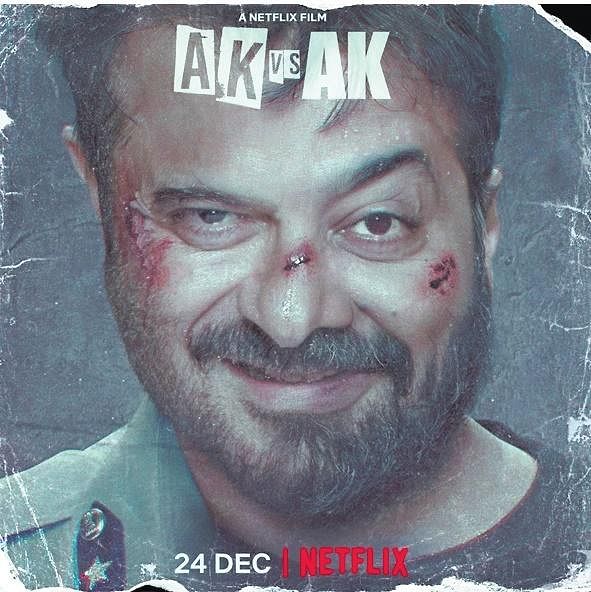 Angered, the director unloads an entire glass on Anil’s face. That final splash is important. Without it, this would just be a film about two Bollywood dads edging out on Netflix. That’s the thing about the mockumentary format: unless you really dial it up, the fakeness starts to show. A little later, Anurag follows Anil into his van to pitch a film. “Sab kuch real hoga (Everything will be real),” Anurag explains, unleashing his brand of cinema on an actor who once snubbed him.

For fans of both AKs, there’s much to chew on. Anil’s older hits — Ram Lakhan, Tezaab, Mr. India, Nayak — are frequently brought up. At a police station he has hurried to, a cop tells him he has seen Woh Saat Din ‘seven times’. The same cop then turns around and identifies Anurag as Madhur Bhandarkar. These injokes earn a chuckle or two, though Vikram isn’t shy to poke into other directions: a line about Anurag’s assistant graduating to girlfriend status is surprisingly tart in such a freeflowing film.

The setting of Christmas Eve — which is Anil’s real birthday, and the day of this film’s release — adds extra urgency to the chase. Having given in to Anurag’s ploy, Anil drops by for his birthday dinner at home. This is the bulk of the cameos you’ll get. Boney Kapoor talking exclusively in remakes is hilarious, though the 3-minute drive-by by Harshvardhan Kapoor wont interest most (“Motwane f*#ked me with Bhavesh,” he shouts as he’s shoved out the door).

It’s also where I began wondering if AK vs AK has more to offer than celebrity tidbits. Thankfully, with the visit to the Kapoor household out of the way, the film gets down to business. Anil smacks Anurag across the face; the two throw down against a Christmas tree, a jar breaks. Blood seeps out of Anurag’s nose and cheeks. It’s strange to close out 2020 with such an improbable action scene — yet it actually helps sell the conflict, with neither party holding back.

Despite being a ‘fun film’, it bears Vikram’s signature touch. There’s a show-stopping chase sequence across multiple locations that recalls his work on Bhavesh Joshi Superhero (that it’s Anil, and not his son, pacing in and out of trains offers a weird sense of cinematic déjà vu). The grainy, found-footage aesthetic is disorienting at first, but it complements the later scenes, as Anil rushes across town to find his daughter. As a satire, the film isn’t caustic in its view of the industry.

Anurag grumbles about how Indian audiences are obsessed with stars, but it’s a happy sort of grumble, not the sardonic digs he packs into his own films. Once an outsider in Bollywood, the director is shown revered and welcomed by all. Similarly, the references to Anil’s films are not idly made — there’s genuine awe and enthusiasm underlining Avinash Sampath’s screenplay. It all comes alive in one scene. Anil, unable to nab the cab driver who’d picked up Sonam, turns back to a Christmas carnival near a chawl. The revelers are amazed as he implores them for the driver’s address.

A cheer for a performance goes up, and Anil, though injured and bleeding from his face, breaks into his iconic My Name Is Lakhan number. Anurag stands clapping to one side, and it’s hard to miss the boyish admiration on his face, even though he’s playing the villain and notionally hates Anil. AK vs AK doesn’t break ground in cinematic invention. There are narrative gaps you’ll be willing to forgive, others not so much. It does, however, offer a nugget about filmmaking itself. “Who is more important — an actor or director?” someone asks at the start. The true answer is revealed later on, with Anil limping away from an accident and Anurag asking his camerawoman, “Did you get the shot?

Now we are on Telegram too. Follow us for updates
TAGS
Vikramaditya Motwane Anurag Kashyap Anil Kapoor Allwyn Kalicharan