'Solo Brathuke So Better' review: A semi-joke of a trite film!

One or the other tragedy has to keep taking place for Virat and Amrutha to think beyond their inanities.

Films can be either bizarre or cliche-ridden. Most of even half-decent films we watch are more of the latter than the former. A scintillating achievement of Solo Brathuke So Better is that it is so bizarre that it makes us miss cliche-ridden films with so much ease. It plays out a semi-joke of an idea believing that it will touch the hearts of the audience. That’s its spectacular tragedy. 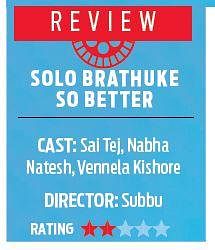 Virat (Sai Dharam Tej, who for some unknown reason has started to have Sai Tej as his screen name), we are told, is the founder of Solo Brathuke So Better Union. He delivers WhatsApp jokes on marriage, calls them ‘slokas’ and hundreds of his young followers behave like possessed beings.

No, he is not doing it in a playful song. He does it for the entire first half, almost. And he is not your cute chocolate boy who mouths platitudes against love and marriage. He is actually seen as a Rockstar whose disenchanted followers once go to the extent of burning his larger-than-life cut-out on a busy Vizag road.

The film keeps repeating the same idea (that marriage is hell-like, that committed relationships compromise our freedoms and happiness) till we start missing films like Nishabdham and V. As if infantilising itself through dialogues is not enough, the film repeats insufferable banalities in the form of mediocre songs as well.

The film would still have redeemed itself had the love track been soulful. Nabha Natesh’s delayed introduction (she enters the scene at interval, which is sort of experimental for a dumb commercial movie) proves to be a blessing in disguise. Like the silly male lead, she too seems to believe that if you want to live happily, you have to be incapable of emotions. And, if you want to have a bonding with a person of the opposite gender, it necessarily has to be romantic. Like there is no middle ground, a man and a woman can’t be friends. She is like a trainee Communist who takes ideology more seriously than 5-star Marxists. And Rao Ramesh is like an ex-Communist who regrets that he didn’t take a job offer from Reliance during campus placements.

One or the other tragedy has to keep taking place for Virat and Amrutha to think beyond their inanities. And the sentiment conveyed by the film’s title is repeated in all sorts of scenes. Heck, a character mentions the title in a suicide note! We know this is 2020 but should a filmmaker like R Narayana Murthy be elevated to the status of a philosopher?

It’s shocking that no one told the film’s debutant director Subbu that Virat is not anti-marriage but anti-human. He doesn’t talk properly with his father because, as per one of his goddamn ‘slokas’, one has to stay away from family members for good (not from the mother, though, because she is the unpaid house help we can’t afford to do without). Virat is what you get when you fuse lousy parenting with narcissism. And Solo Brathuke So Better is what you get when you blend imbecility with verbal diarrhea.

Now we are on Telegram too. Follow us for updates
TAGS
Solo Brathuke So Better Virat Sai Tej

'Aelay' review: A warm, funny tale bogged down by some missteps

'1962: The War in the Hills' review: Trekking to disaster

'I Care A Lot' review: This Rosamund Pike-starrer knows how to con you right

'Thirike' review: A fresh take on a familiar tale of brotherhood