In the middle of the film, Anwar (Kunchacko Boban) is addressing a class of psychology students. The discussion is about whether every creative individual in the world has some sort of deviancy. “Not necessarily,” he tells a student. He cites himself as an exception, saying that he doesn’t have any mood swings despite being a creative individual. But even he, a psychologist-cum-criminologist, loses his sleep once he learns about some unsettling developments concerning a serial killing case. 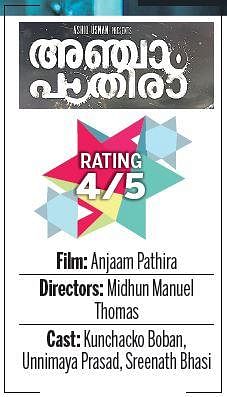 Anwar is the hero of Anjaam Pathira. But what about the villain? Without going into spoilers about who he is, or what he is, or who plays him (it’s a familiar, incredibly talented actor), it’s safe to say that this serial killer is an extremely skilled and creative individual. He belongs to the other camp though—the ones with deviant behaviour. But there is a reason why he became that way, and there comes a point in the film where you’re not sure if you should be rooting for him or not.

But before getting to the revelations, just sit back and watch the anonymous killer brutally dispatch his victims (the gory bits are blurred out) after kidnapping them inside a vehicle that looks like a monster with glowing red eyes in the pitch-black night. He comes up with some inventive ways to surprise his targets.

You see, this is one of the qualities of a damn good crime thriller—having a terrifying villain who can also evoke empathy when his past is revealed.

It’s one of the reasons why the Joker is a favourite comic-book villain to many. But I would be exaggerating if I compared the villain in Anjaam Pathira to Joker, or for that matter the psychopath in the recent Tamil hit Raatchasan. I mention the latter because I’ve seen people wondering if Anjaam Pathira is Malayalam cinema’s answer to Raatchasan, when the trailer came out. I wouldn’t make that comparison because, despite finding Raatchasan to be a very thrilling experience, I found Anjaam Pathira to be a more sophisticated film because it’s relatively much closer to the real world.

The film constantly strives to be naturalistic by keeping its settings and characters grounded, and even makes attempts to make us aware of this at one point by having one character say, “That happens only in cinema.”

This is a film where junior officers don’t get to deliver fiery one-liners when their superiors call them idiots, as in the case of the female police officer leading the investigation, Catherine (a terrific Unnimaya Prasad), who is rebuked for her perceived incompetence. The closest a character comes to delivering a “punchy” line is when Anwar tells a rival officer that he doesn’t need anyone’s favour to conduct an independent investigation. But at the same time, what I loved about the film is that it doesn’t shy away from flaunting some of its cinematic influences, like —this is not a spoiler—a plot development borrowed from the Mammootty film, The Truth. One character even blurts out the film’s title, a scene that was met with applause from the audience I saw this with.

Anjaam Pathira is also bolstered by other qualities that make a damn good crime thriller, like its dread-inducing atmosphere—all taken care of by some of the most accomplished technicians currently working in Malayalam cinema.

Cinematographer Shyju Khalid photographs Kochi as if it’s another character. I’ve not seen the city captured this way in any other film recently, especially the night portions.

Director Midhun Manuel Thomas and Shyju train the lens at some of the city’s creepiest, hitherto unexplored corners. But this is a film where even the busiest junction can be used to create a sense of urgency and doom.

The characters are often bathed in impressionistic lighting, with blues, reds, and greens being the dominant colours. And editor Saiju Sreedharan makes the cuts in all the right places. Sushin Shyam’s background score is at times evocative of the score in The Dark Knight, in a good way, of course.

The last time an investigative thriller from Malayalam cinema managed to sustain my interest throughout its duration was Jeethu Joseph’s Memories. One can tell the makers enjoyed making this film.

There is so much clarity in the way it conveys each piece of information to us. This is the trickiest part of any mystery film. But Anjaam Pathira makes all the right moves. It’s Midhun Manuel Thomas’ best work so far.

Wild Karnataka review: A stunning look at the diversity of life in India’s richest habitat