Although the series begins in the Sunderbans, it soon shifts base to the luscious and seemingly less-dangerous Manali where the proverbial hell breaks loose.

At what point do we stop turning a blind eye to the crimes around us? Each of us has a different threshold for accepting crimes. Road rage doesn’t affect us till it happens to us. An influential person getting away with any crime doesn’t affect us till it happens to us. But isn’t decency and ethics all about siding with the right irrespective of who the wrongdoer is? Which is that one criminal act that makes us understand that not all crimes can go unpunished? These are the questions posed by writers Mohinder Pratap Singh, Sidharth Sengupta, Umesh Padalkar, and Varun Badola through Sony LIV’s new series, Undekhi, directed by Ashish Shukla.

Although the series begins in the Sunderbans, it soon shifts base to the luscious and seemingly less-dangerous Manali where the proverbial hell breaks loose. Two girls, accused of killing a cop, are on the run from Sunderbans and find refuge in Manali. There is a lavish wedding happening in a resort that sees these girls dancing at the boorish stag party. A Michael Corleone-Esque Daman Atwal (Ankur Rathee) is set to marry Teji Grewal (Anchal Singh). Both Teji and Daman don’t like the outlandishness and brashness of the Atwal family. The perfect set-up for that proverbial hell. There is one murder. A subsequent cover-up. One dogged inspector, I mean Deputy Superintendent of Police, on the chase. 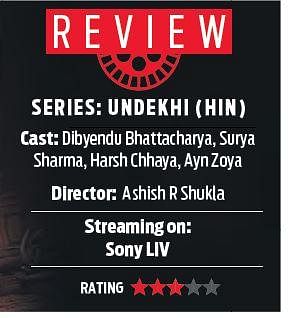 Unscrupulous political power in all its glory. Patriarchy, misogyny, class, and caste discrimination rears its ugly head. As I said, all hell breaks loose. Undekhi plays out like a triangular crime story. There is the extremely rich and powerful Atwals at one end. The scared and on-the-run girl from Sunderban, Koyal (Apeksha Porwal), on another end, and the persistent cop Barun Ghosh (A brilliant Dibyendu Bhattacharya) completing it. With the series hitting the ground running wasting little time to get us acquainted with the power dynamics in play, Undekhi is on a firm footing. The series is essentially about Rinku Atwal (a scarily effective Surya Sharma), the troubleshooter of the family, who employs every crime in the book to save his perennially sloshed, badmouthed uncle (Harsh Chhaya having too much fun), the patriarch of the Atwal family, from his “indiscretion”.

DCP Ghosh wants to follow every rule in the book to bring the criminals to justice. Koyal is clutching at straws to save herself from the goons. The drawback of the three main characters being increasingly one-note is negated by the colourful secondary characters. It is these peripheral characters that prove to be an interesting case study on what is best left unseen and unheard when it comes to crimes in big places.

It is easy to wax eloquently about doing the right thing. But when presented with the option of doing the right thing and saving yourself, what would we choose? I particularly liked the character of wedding photographer Saloni (Ayn Zoya). While her friend Rishi (Abhishek Chauhan), a witness to the murder, wants to be there for the victim, Saloni is more interested to wriggle her way out of this mess, albeit a bit richer, thanks to her negotiation skills. Is she wrong? Yes. But what would we have done? Undekhi delves into the psyche of people who are forced to decide between the greater good and morals. A fight that people often do on various levels. The best part about Undekhi is that the series is extremely non-judgemental. It just provides us with facts about all its players without taking a moral stance on anything.

Even DCP Ghosh, who is made to run pillar to post trying to be ethical and morally upright is forced to question his stance when other cops are swayed by influence and put him down constantly. However, he doesn’t rattle off punch dialogues about the corrupt nature of the society. Ghosh just tilts his head above, closes his eyes, and sings a Hemanth Kumar number. Ghosh knows how the system works. Ghosh knows whom it favours. Ghosh knows he is just a pawn in the system. This calmness doesn’t come from a place of confidence. It comes from a place of resignation.

Undekhi is also about how various players in the series slowly reach that place of resignation where they know nothing can be done except to adjust to what’s happening. No retaliation. No struggle. Just adjust. Undekhi effectively manages to weave out a tale of everchanging morals despite portions that seem too stretched out. Certain conflicts are resolved in the most convenient manner that it is laughable. Even some twists, including the final one, seems too far-fetched that it dampens the close-to-reality- helplessness seen till then. Nevertheless, Undekhi, powered by impressive performances and earnest writing, is a worthy addition to the growing number of Indian thrillers thriving in the OTT space. In an already crowded territory with a lot of competition, Undekhi will do to Sony LIV what Asur did to Voot — turn people’s heads towards them. Do they hold the attention or become complacent like some bigger players? We’ll wait and see.

Now we are on Telegram too. Follow us for updates
TAGS
Undekhi review