'Miss India' review: A woman sells tea in the US at the expense of us

Miss India is a film that looks to turn the tables on the conventional hero-rises-in-business template, by having a woman at its centre.

Look, let me state the obvious first. Any film that celebrates a woman, an underdog in most societies, especially ours, holds value. Any film that has a woman at its centre, that discusses the problems of her life, holds a certain utility. But this isn’t to say at all that any of this can save a film from being an insufferable bore. Miss India is a film that looks to turn the tables on the conventional hero-rises-in-business template, by having a woman at its centre.

The ‘troubled’ family, the worshipping cinematography… it’s all there. There’s even the additional layer of how the villain here is just a symbol of oppressive men, of an oppressive patriarchal system that won’t allow a woman to even dream in peace. Soon as Keerthy Suresh’s character vocalises her dream, the stifling responses come at her. But let us guard against the pitfalls of attributing too much feminist importance to this well-meaning but flawed film.

It’s a film with wooden performances from supporting characters, bad dialogues, one too many contrived moments, and quite a bit of problematic portrayal too—like that Alzheimer’s patient who almost gets used as comic relief. This film that tries to mean well for women has its central character, Manasa Samyuktha (Keerthy Suresh), telling a date that should a woman say that she’s thinking about a decision, it means it’s a yes, and that should she say yes, then she shouldn’t be thought of as a woman at all. To borrow a modern idiom, the mind really boggles.

It’s the film equivalent of that elderly person in every family who’s intolerable for how they always dole out sanctimonious advice. You could easily create one of those superficial self-improvement books using many of the ideas in here. The film begins with a line about how greatness is a quality that’s neither acquired through the recognition of others, nor lost through a lack of acknowledgement. It’s said once more in the film. Manasa’s brother gifts her a watch but not before uttering, 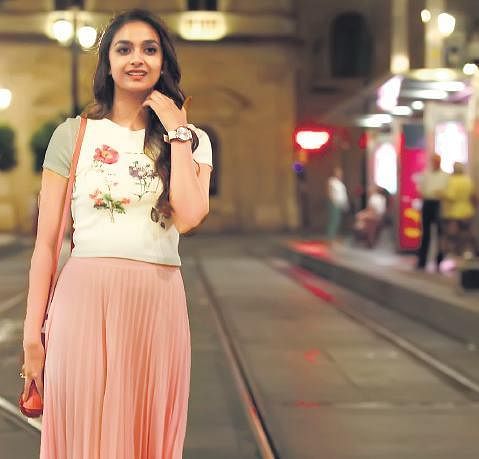 “Time is the most valuable thing.” Someone else says a strange line about how compromise is a close friend, how lie is a neighbour, and how adjustment is a lover. Manasa is constantly talking about the utility of taking risks. Another character declares that if you don’t build your dreams, someone else will hire you to build theirs. My personal favourite is when a solemn Samyuktha shares that struggle cannot be purchased at a shop. Wait, did someone think you could? The film is a treasure trove for those who like to deck their walls with posters of superficial lines masquerading as profound wisdom.

The situations are mostly laughable. A man, who gets an unlikely chance to work in America, is asking his entire family (including his grandfather) to join him there, as though he were embarking on a tourist trip. Samyuktha who is apparently allowed to start a business there, throws shade at an NRI man for abandoning his Indian roots (and for some reason, he doesn’t ask her what she’s doing in America then). Male characters can often be found saying stupid statements or asking ludicrous questions, only so Samyuktha can take them down with easy retorts and come across as a strong woman worthy of Thaman’s background music.

Like the HR head whose sole question in the interview is, “Why should I hire you, a woman, when there are three men waiting outside?” Samyuktha goes on to answer it like she had already read about it in Most Famous Interview Questions. She tries to talk about the value she can bring as a woman, and for some reason, mentions birthing babies. The interviewer, perhaps excited by the suggestion, says that her answers were electrifying. I wished I were being electrocuted.

All characters in Miss India are cardboard cutouts, and masters in bad diaogues and exaggerated emoting. They are all perhaps liars too, because though Samyuktha’s family keeps talking about how poor they are, you barely see any evidence of it, be in the clothes they wear or the houses they live in. A man offers to take Samyuktha on a date, and on the day, takes her to an apparel shop first, without the girl ever getting offended. The central idea of this coffee-tea rivalry plays out like a fanciful game between toddlers. What more can you say of a film that’s set in America, but one that doesn’t have a single character speaking in American English?

It’s so hard to feel anything for this film, for its characters, that towards the end when Samyuktha is saying something powerful—about how women transform a house into a family, about how they turn happiness into love—I couldn’t wait to be put out of my misery. So used was I by then to Samyuktha’s generic one-liners masquerading as empowerment that I related more to the response of Jagapathi Babu (playing an infantile businessman), who rolls his eyes in seeming boredom.

Look, as I began saying in this review, it’s useful that Samyuktha is being shown to be a dogged woman, as someone who won’t compromise on her ambition, but in a film as dull, the messaging never even hits the runway, let alone take off. While suffering through this 2-hour-20-minute-long torment, I dimly remembered that one-liner said by Samyuktha’s brother: Time is a most valuable thing. Sometimes, it feels like film critics understand this better than anyone else.

Now we are on Telegram too. Follow us for updates
TAGS
Miss India Keerthy Suresh