There could have not been a better time for a sequel to the shocking and amusing 2006 film, Borat: Cultural Learnings of America for Make Benefit Glorious Nation of Kazakhstan.

There could have not been a better time for a sequel to the shocking and amusing 2006 film, Borat: Cultural Learnings of America for Make Benefit Glorious Nation of Kazakhstan. With the world in a tumult, with a pandemic raging, popculture aficionados’ favourite Kazakh journalist Borat Sagdiyev (Sacha Baron Cohen) returns to make us feel better. 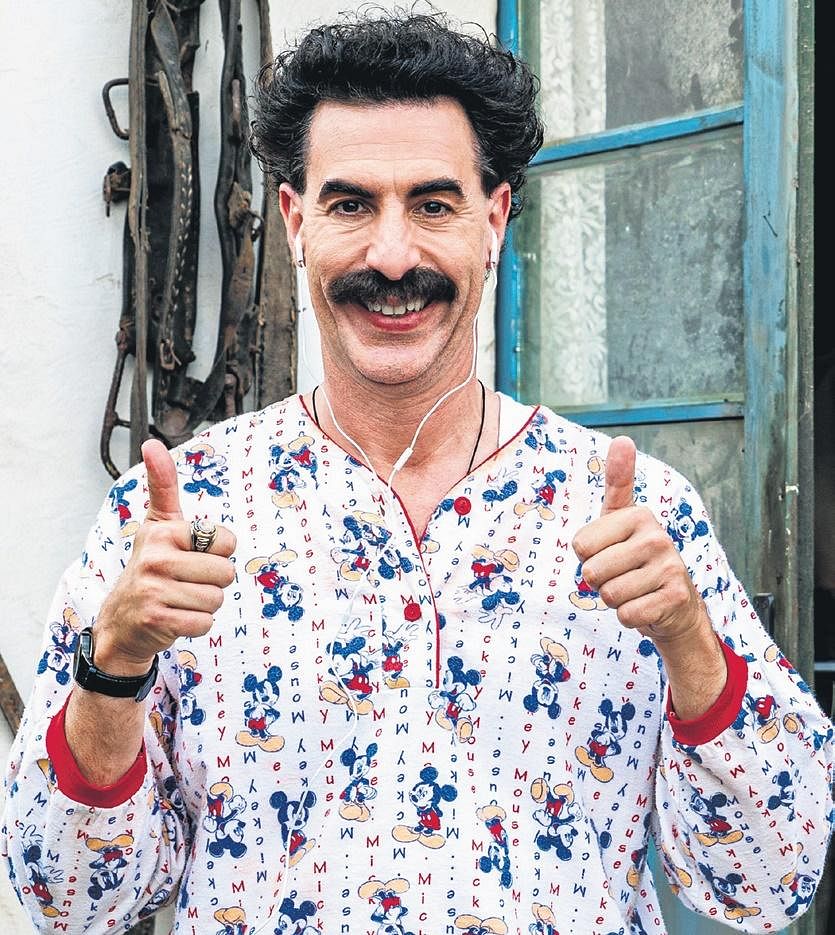 This time, he has more topics to touch on and a mission to carry out as well, as opposed to kidnapping Pamela Anderson as he did last time around. The world, and “the US of A”, as he likes to call it, has come a long way in the last decade and with the Presidential election being less than a week away and the unceasing COVID-19 situation, Borat has never had this much on his plate before.

Hence, it’s no surprise that the sequel, actually titled Borat Subsequent Moviefilm: Delivery of Prodigious Bribe to American Regime for Make Benefit Once Glorious Nation of Kazakhstan, almost lives up to the reputation its predecessor created, almost! In the first film, Borat took a dig at homosexuality, feminism, religions such as Islam, Christianity and Jew, apart from ludicrous stunts like feeding cheese to a politician and later sharing that it was made from his wife’s milk.

It was a culture shock to many and showed cinephiles how films can make fun of topics that are often considered serious or taboo. Unsurprisingly, right from those who made appearances in the film (who were told that they were appearing in a documentary), to the government of Kazakhstan, many tried to take legal action against the team.

On the other hand, Borat became a cult classic for its amusing mockumentary that received a nomination at the 79th Academy Awards for Best Adapted Screenplay. Unsurprisingly again, the cases have already got a line up of cases to handle — this time even before the film’s release. Remember the scene in the first film where Borat frenchkisses a woman only to later tell how she’s his sister and she’s the fourth-best prostitute in the city? This time, Borat, who is imprisoned in a forced labour camp for embarrassing Kazakhstan, is made to seek redemption by delivering the country’s minister of culture and its best porn star, Johnny the Monkey, as a gift to Trump.

But fate has other ideas and instead of Johnny, Borat gets his 15-year-old daughter Tutar (a brilliant Maria Bakalova) delivered in a crate to USA and thanks to his previous gross tryst with Trump’s hotel in the first part, Borat decides to ‘gift’ Tutar to Vice President Mike Pence. The sequel is everything you’d expect from Cohen — pranks masqueraded as interviews and plot points penned in a way that has Borat interrupting random civilians and celebrities in his own uniquely rude way that brings out the worst of the interviewees.

The unruly privileges of the white man are now more out there in the open than they were before, thanks to the Trump administration. The film has no qualms in projecting that reality. There’s a scene where a cosmetic surgeon is ready to work on a ‘disfigured jew nose’, a boutique employee who is willing to help out when Borat asks for a ‘no but yes’ dress, a pastor who calls Tutar’s pregnancyprank a “gift of Jesus” and voices his anti-abortion views even after knowing that her father is the “reason” behind her pregnancy.

The humour is more political and philosophical than in the first part which relied more on slapstick. Instead of letting a chicken loose in a crowded subway or running around naked through a hotel lobby, we see sketches like him being a holocaust denier, one of his sons renaming himself as Jeffrey Epstein and the best ones in which he dresses up as Trump and gatecrashes a conference where Pence is the speaker. Or how about the gag where an eminent personality gets caught on camera with his pants down? The best part of Borat’s style of humour is how it’s never preachy but makes you laugh first and then plant a deep thought that blooms long after the scene has passed.

Cohen, who we recently saw in a stellar role in The Trial of the Chicago 7, seems extremely comfortable in this avatar that is miles ahead of his other personas such as Ali G and Admiral General Aladeen. He wastes no time introducing us to Borat and the sequel also tells us why he doesn’t have to. In his Borat attire, Cohen is captured many times by the public and most of the time, he puts on prosthetics or dresses up differently.

In a scene where he tries to find a different getup, he ironically finds his Borat attire. The surprise package is the Bulgarian actor Maria Bakalova, selected among 600 actors, who aces the role of a teenager, who is the oldest unmarried women in the village. On the flipside, Borat 2 relies more on the character arcs and storyline and while this would be a positive in any other film, that’s not what you expect from Borat. The grossness and goofiness quotient has been reduced dramatically, and though that’s not a dealbreaker, I wish we got a lot more of that. And yet, Borat 2 is audacious and hilarious, and a bitter reflection of what one of the biggest democracies thinks of others and itself. And if that’s not good enough…

Now we are on Telegram too. Follow us for updates
TAGS
Borat sequel Sacha Baron Cohen Borat Subsequent Moviefilm

'The Call' movie review: Connecting with the past

Tenet Movie Review: Many heady pleasures in a film that’s not rousing as expected

Yorgos Lanthimos impresses with yet another enigma